State policy in the area of the cultural heritage is lead and implemented by the Council of Ministers. The Minister of Culture in relation with the competent state and municipal authorities, the Holy Synod of the Bulgarian Orthodox Church, the central managements of other registered religions and the civil society are responsible for the implementation state policy in this area.

The strategic objectives for management and conservation of the cultural heritage shall be included in the National Strategy for the Development of Culture following wide public discussion with the participation of the interested scientific and cultural organizations, non-profit legal entities and registered denominations. A National strategy (called “A National strategy for the development of arts, the cultural and creative industries, the cultural heritage and the cultural tourism”), is in final stage of preparation with the broad involvement of the non-governmental sector. The protection of cultural heritage and disclosure of its potential as a factor for sustainable development has been defined as a strategic goal. The involvement of local authorities in the protection of cultural properties through improving the management tools, and activation of public-private partnership is of great importance. 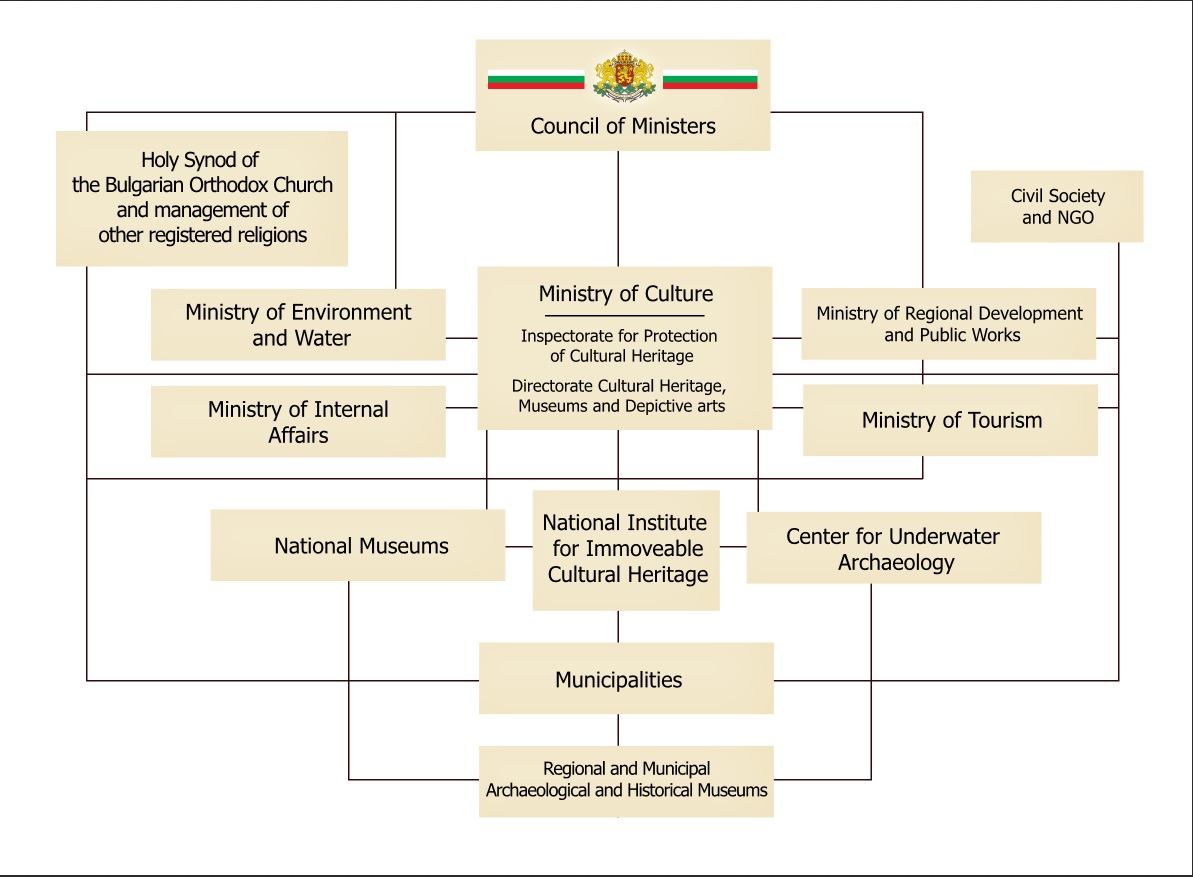 They can make proposals to the Minister of Culture for registration of the cultural properties that are of significance to them.

It supervises the compliance of the requirements of the Cultural Heritage Act.

They search, study, protect and present the cultural heritage with cognitive, educational and esthetic purposes. The state immovable cultural properties are granted without compensation for management to institutions and municipalities for implementation of preservation and presentation, scientific, cultural, educational and tourist activities performed by archaeological and historical museums based in the respective municipality.

2. Law on Protection and Development of Culture

5. Ordinance for creation, maintenance and provision of information by an automated information system "Archaeological Map of Bulgaria"

6. Ordinance No.12 from November 21-st, 2012 for the order of identification, declaration, granting of status and defining the category of the immova ble cultural heritage, for the access and circumstances subject to entry into the national register of immovable cultural heritage

7. Ordinance for the scope, structure, content and methodology for devising of Conservation and Management plans for single and group immovable cultural properties

8. Ordinance for the terms and conditions for presentation of the cultural heritage

9. Ordinance for the terms and conditions for reproduction of cultural heritage into copies, replicas and artifacts with commercial designation

10. Ordinance for creation, content, maintenance, conservation and usage of the National Documentation Archive to the National Institute for Immovable Cultural Heritage and the scientific archives of the museums

Note: The links present the legislation / laws and regulations in Bulgarian only. The laws and some ordinances could be found translated into English on the websites of "Siela" and "Apis" that are available after registration fee.