Between 2009 and 2013, the Ministry of Culture has elaborated a series of normative-legislative documents with the aim of facilitating the development of cultural areas and safeguarding national heritage. From the fifteen thousand sites known only 5,206 are included in the Register of monuments protected by the state .The total of monuments include about 8000 archaeological sites, about 100 old and early medieval citadels, 3 medieval wall fortresses, 6 medieval towns (Orhei, Lăpușna, Tighina, Soroca, Căușeni, Chișinău), 788 churches, 129 manors and more historic towns from the 19th century (Bălți, Cahul, Chișinău, Orhei, Soroca, Tiraspol). In the same way, out of those 5206 monuments included in the register, 4806 monuments are considerated of national importance and 1120 of local importance. Most important national monuments are located in Chișinău – 419, and in Edineț district – 380. Thus, from the register of monuments protected by the state there are 2696 archaeological sites, 1284 historic monuments, 1261 architectural and 225 art monuments. 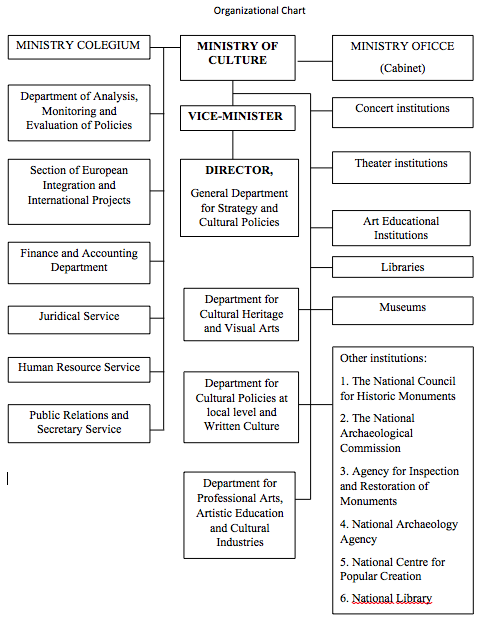 In view of the integration of the Republic of Moldova to the EU, a Cultural development strategy – “Culture 2020” - was elaborated by the Ministry of Culture. Its scope is to both, protect and value the country’s cultural heritage as a national priority. In the strategy, a number of key-objectives and specific actions to be implemented are identified:

The authorities responsible for implementing these objectives are the Ministry of Culture and the subordinated institutions, including also profile institutions at local level.

At local level the responsible institutions are the Local Public Authorities and the local Culture Directions. At national level, the ones responsible are the Ministry of Culture, the Agency for Inspection and Restoration of Monuments, the National Archaeologic Agency.