The Principality of Monaco is a hereditary and constitutional monarchy whose political and institutional regime is governed by the Constitution of 17 December 1962 (revised in 2002).

The Executive Power falls within the High Authority of the Prince, the direction of the services being entrusted to the Minister of State, assisted by five Government Councillors - Ministers who each head a Ministerial Department: Interior, Finance and Economy, Social Affairs and Health, Equipment Environment and Urban Planning, External Relations and Cooperation.

Within the Department of the Interior, the Directorate of Cultural Affairs is responsible for proposing any measure likely to give a new impetus to the Principality's intellectual and artistic life.

Faithful to the tradition of artistic patronage exercised by the Princes of Monaco, the Prince's Government pursues an active cultural and heritage policy, promoting the development of the arts in the Principality and contributing to the dissemination of culture and heritage to a wide public and in all its forms.

As a vehicle for the Principality's influence abroad and a component of its attractiveness, culture and heritage benefit from around 5% of the State budget, which is mainly devoted to supporting entities and artists, developing quality programming for local and regional as well as international audiences, developing projects relating to heritage and financing the operation of appropriate cultural facilities.

The cultural offer is wide and diversified in the Principality where the most varied cultural expressions have the opportunity to express themselves. 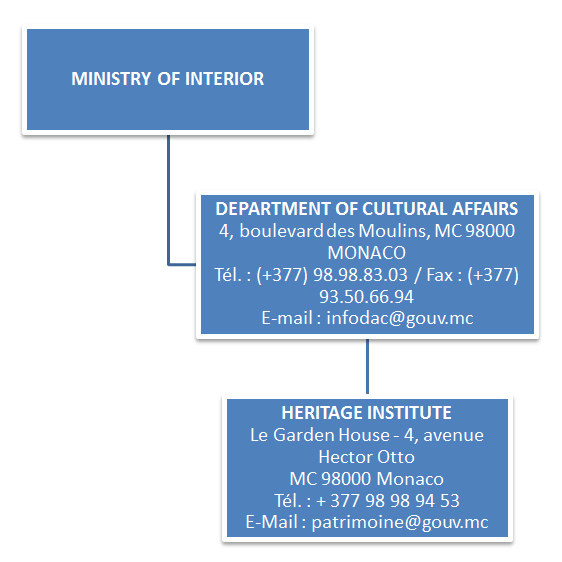 It is responsible for:

The Heritage Institute (established by Sovereign Order No. 6708 of 11 December 2017), placed under the supervision of the Directorate of Cultural Affairs, is the State service responsible for centralising actions aimed at preserving and enhancing the national heritage.

The Institute is also responsible for:

All ratified international agreements and/or treaties must be published in the Official Journal of Monaco, the purpose of which is to make the content of the agreement public and to introduce the agreement into the national legal system.