The conservation of important archaeological and historic monuments is a priority for the government. However, private property forms the major part of the architectural heritage of the island. For its protection, conservation and enhancement, the co-operation of the private and public sectors is important. The government’s commitment to the Preservation process is materialized through relevant Legislation and other actions. It has a regulatory and a pro-active role as it seeks to promote private interests and investment guaranteeing financial support for the rehabilitation of listed properties and privately owned ancient monuments through grants, tax deductions and other incentives (eg. transfer of development rights for Listed Buildings).

The priorities of the Preservation strategy includes: 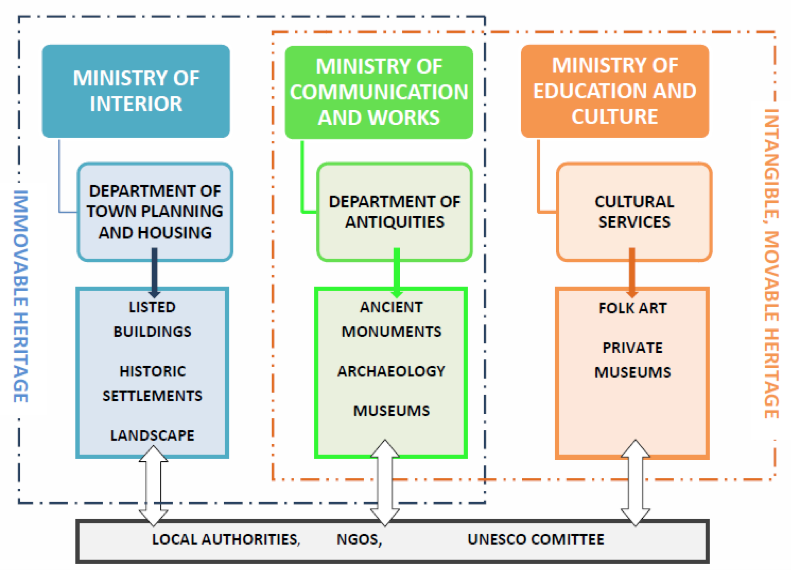 The responsibility for cultural heritage lies into three institutions of central government:

It is the Cyprus government’s department responsible for spatial and land-use planning development control as well as cultural heritage and landscape’s preservation. Its competencies in the field of cultural heritage comprise the inclusion of appropriate policies in Development Plans and Listed Buildings management. The Department is responsible for the issuance of Preservation Orders for buildings, group of buildings and areas of architectural, historic, and social and other special interests, for the issuance of Planning Permits (Consents) for the rehabilitation of Listed Buildings as well as for the management of grants. It undertakes research and surveys in relation to architectural heritage and landscape and manages the Architectural Heritage Archive. It offers advice, guidance as well as awareness-raising and educational activities in relation to cultural heritage.

Department of Antiquities (Ministry of Communication and Public Works)

It is responsible for the management of the archaeological heritage of Cyprus. The Department's main areas of activity and responsibility include the systematic and rescue excavations as well as archaeological surveys, the establishment, management and operation of archaeological museums, and the conservation, restoration, protection and promotion of Ancient Monuments in the First and Second Schedule of the Antiquities Law, of archaeological sites and of monuments of architectural heritage.

Cultural Services under the Ministry of Education and Culture

Their responsibilities are to promote cultural awareness by fostering the creative drive in the field of Letters and Arts both in individuals and groups, making culture available to all, in order to promote a greater participation and receptiveness on behalf of the public and disseminating and projecting cultural achievements abroad in order to highlight its links with international culture.