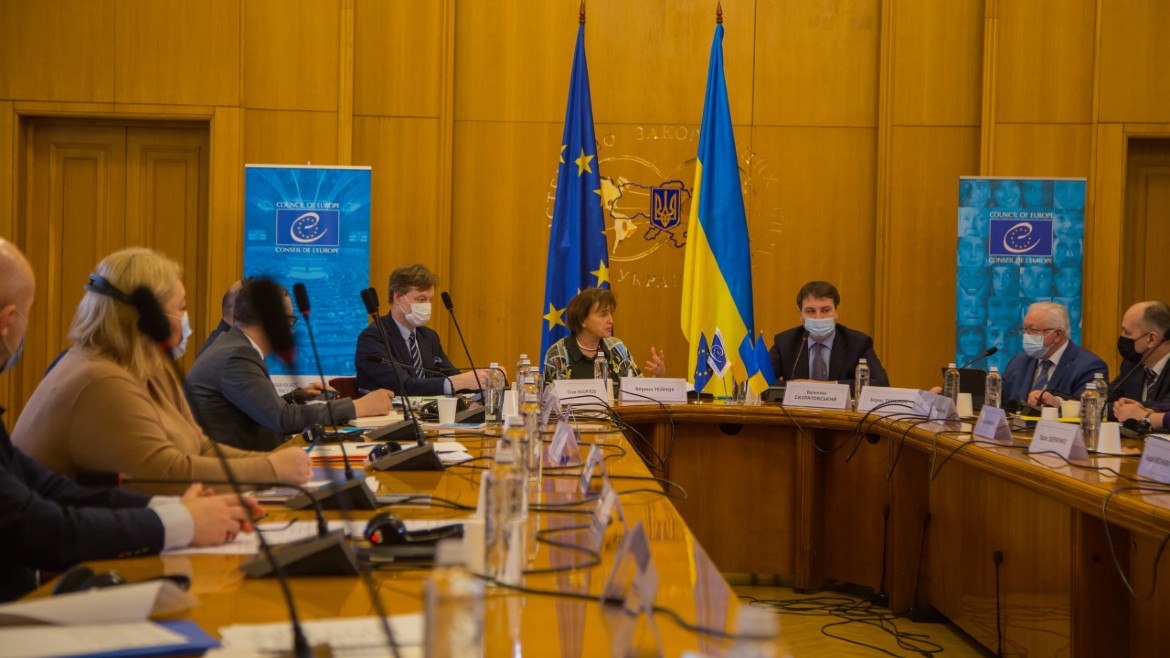 During the welcoming speech Verena Taylor thanked the Ukrainian partners and international donors involved in the implementation of the Action Plan as well as Council of Europe’s colleagues in the Council of Europe Office in Ukraine and in Strasbourg for their commitments despite all difficulties and the COVID-19 pandemic.

“The current Action Plan ends this year. But at the same time, we are looking into the future and have a first exchange on what the next Action Plan for Ukraine could include. The next Action Plan will start at the beginning of 2023 and will last until the end of 2026. We have to start working on it.” stated Verena Taylor.

The Director of the Office of the Directorate General of Programmes of the Council of Europe highlighted: “The current Action Plan is record-breaking in terms of financing. It is the biggest Action Plan of Council of Europe at the biggest field office. We have been able to raise nearly 36 million euros, which is very important. The Context of Action Plan is also with regards to other commitments of Ukraine. For example, it contributes, in an important way, to goals of sustainable development within the United Nations context. We are totally compatible on that and this allows Ukraine indeed to advance on that level”.

The participants exchanged their views on the state of implementation of the projects in the areas of democratisation of society, the rule of law, human rights protection and promotion of equality. They praised the results of the last two years of the Action Plan.

Borys Tarasyuk, Permanent Representative of Ukraine to the Council of Europe, said that there are all the grounds to expect the future Action Plan for Ukraine 2023-2026 to be even more comprehensive and ambitious, than the previous one, and the interest of partners is obvious.

Ukrainian partners expressed their deep gratitude to the Council of Europe for supporting and promoting reforms and expressed their readiness for further cooperation in the framework of the new Action Plan to be developed.

* On 21 February 2018, the Committee of Ministers of the Council of Europe approved the Action Plan for Ukraine for 2018-2021, which was extended on 1 July 2020 until the end of 2022. The Action Plan is a strategic programming instrument which aims, through co-operation, to accompany the country in its efforts to bring legislation, institutions and practice further in line with European standards in the areas of human rights, the rule of law, and democracy and, through this, to support the country in meeting its obligations as a Council of Europe member state.