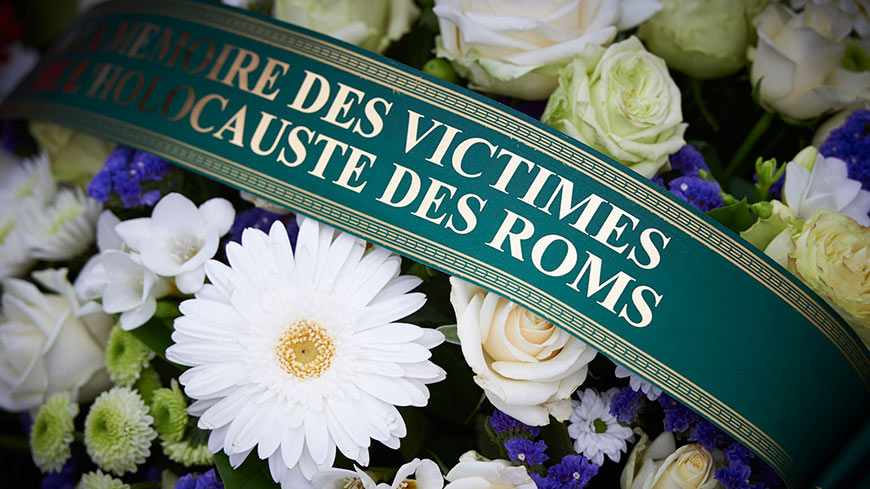 The Council of Europe honoured the memory of Roma Holocaust victims and survivors with commemorations at the infamous Auschwitz-Birkenau concentration camp and at the Organisation’s Strasbourg headquarters.

“Remembrance not only focuses on the past, but also points the way to the future,” said Secretary General Thorbjørn Jagland during a wreath-laying ceremony at the forecourt of the Palais de l’Europe in Strasbourg.

Joined by Ambassador Katrin Kivi, Permanent Representative of Estonia to the Council of Europe, Miranda Vuolasranta, President of the European Roma and Travellers Forum (ERTF) and Nawel Rafik‑Elmrini, Deputy Mayor of Strasbourg, the Secretary General expressed concern over rising anti‑Semitism and anti-Gypsyism in several European democracies.

He said that Roma today are “under threat” in several Council of Europe member States, suffering frequent physical aggression and widespread anti-Roma hate speech on the Internet, and even in mainstream political discourse. “We had hoped that the remembrance of the Holocaust of millions of Jews and Roma would prevent the return of dangerous ideologies. Were we too optimistic?”

On the same day, some 400 Roma and non-Roma young people from across Europe gathered at Auschwitz-Birkenau for a commemoration called Dikh he na Bister (“Look and don’t forget”). Six former Roma inmates attended the Auschwitz ceremony, which was supported by the Council of Europe.

This year marks the 72nd anniversary of the height of the atrocities committed against Roma during World War II. Roma organisations commemorate this tragedy on 2 August, the date on which in 1944, some 3 000 Roma were exterminated in the gas chambers of the so-called "Zigeunerlager" (Gypsy camp) at Auschwitz-Birkenau.

While it is not known exactly how many were killed in the Roma Holocaust, which is also known as Pharrajimos, many historians estimate that the Nazis and their allies murdered at least one quarter of the estimated one million Roma living in Europe before World War II.