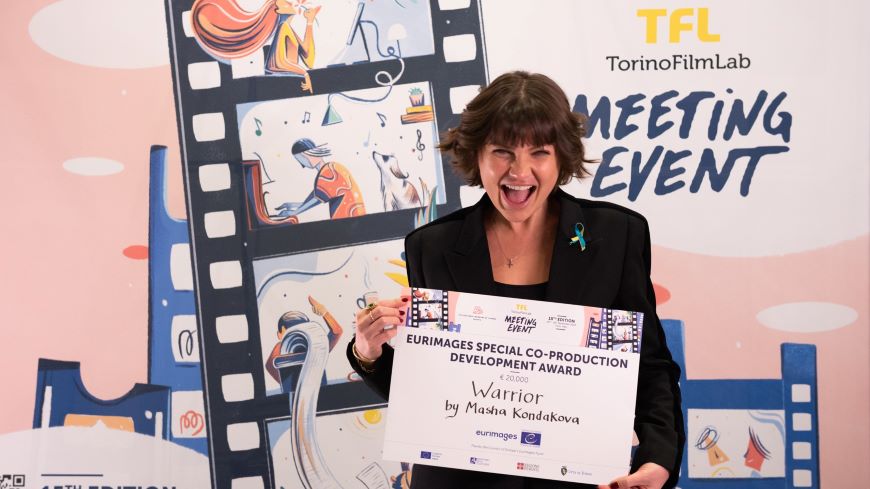 Saturday night, the €20,000 Eurimages Co-production Development Award went to the project SEALSKIN written and directed by Irene Moray, presented in the framework of ScriptLab 2022 at TorinoFilmLab. The jury composed of Maialen Beloki Berasategiu (San Sebastian International Film Festival), Erik Hemmendorff (Plattform Produktion AB in Sweden) and Els Hendrix for Eurimages (Bundesregierung für Kultur und Medien - BKM in Germany) wanted to reward a project that takes a risk to portray the subtle and often invisible violence against women and the women’s resilience. It will be produced by Marta Cruañas Compés from the company Vilaüt Films established in Barcelona, Spain.

A Eurimages Special Co-production Development Award of the same amount (€20,000) went to the Ukrainian project WARRIOR that focuses on corruption in the context of illegal deforestation in Western Ukraine during these difficult times. It will be directed by Masha Kondakova and produced by Valeria Sochyvets (contemporary Ukrainian Cinema Kyiv, Ukraine).

These awards close the year 2022. The next Eurimages Co-production Development Award will be presented at the end of the CineMart which will take place on 29 January - 1 February 2023 during the Rotterdam International Film Festival. 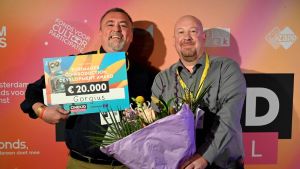 The Eurimages Co-production Development Award of an amount of €20,000 presented in the framework of the Junior Co-Production Market at Cinekid for Professionals in Amsterdam went to the project entitled GORGIUS which will be directed by Samuele Rossi and produced by Solaria Film in Italy, in cooperation with the Slovenian company Arsmedia. The jury composed of the producer Iris Otten (Juliet), Nicolai Korsgaard (TrustNordisk) and Ilse Ronteltap (Netherlands Film Fund) for Eurimages was impressed by the quality of the projects and the professionality of the pitches which led to in-depth conversations with the filmmakers. It decided unanimously to reward this project which has the potential to become a strong European co-production. Given the successful cooperation between the writer/director Samuele Rossi and the producer Emanuele Nespeca on their previous film, the members of the jury were confident in the ambitions and intentions of this team on their new project. All Cinekid for Professionals awards can be found on the Festival’s website. 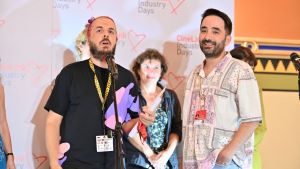 22/08/2022 - The CineLink Co-Production Market wrapped up on Thursday evening with the presentation of the Eurimages Co-production Development Award to the project THE BOY WITH THE LIGHT-BLUE EYES to be directed by Thanassis Neofotistos and produced by Ioanna Bolomyti  from the company Argonauts Productions (GR). The jury composed of Inke Van Loocke (International Film Festival Rotterdam), Klaudia Śmieja-Rostworowska (Madants)
and Nino Kirtadze (Georgian National Film Centre) for Eurimages chose to reward “a modern fable, which takes us on an adventurous journey to self–acceptance, in a society that is hostile to anything different”.

On the initiative of the Eurimages Board of Management, a Eurimages Special Co-production Development Award of the same amount (€20,000) went to the Ukrainian project entitled CHERRY BLOSSOMS to be directed by Marysia Nikitiuk and produced by Igor Savychenko. According to the jury members, this film "explores personal scars and traumas left by the ongoing war through the eyes of three people, who lost their world and try to build a new one". More information on the Festival’s website. 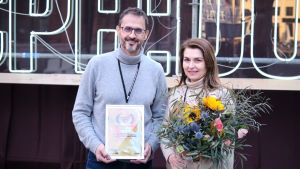 31/03/2022 - The €20,000 Eurimages Co-production Development Award dedicated to documentaries went to the project THE LAST NOMADS which was presented in the framework of the 19th edition of CPH:FORUM in Copenhagen. This exemplary co-production between Serbia, Montenegro, Croatia, Belgium and France will be directed by Biljana Tutorov and Petar Glomazić and produced by the Serbian company, Wake Up Films. The jury composed of Anne Köhncke (Final Cut for Real), Vesna Cudić (Met film Sales) and the Eurimages national representative for Albania, Eduart Makris said: “We were impressed by this project which brings us to a place we didn’t know existed, a place of striking beauty and importance to humanity. A story of the human being in a David against Goliath battle, urgently reminding us not to lose our way in the fog of war.” See the press-release and the festival’s website. 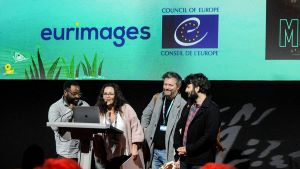 10/03/2022 - The Eurimages Co-production Development Award of €20,000 presented today at Cartoon Movie went to the project MELVILE which will be directed by both Romain Renard and Fury Teyssier and produced by the Belgian company Need Productions in co-operation with Special Touch Studios & Creative Touch Studios in France. The jury composed of Frédéric Corvez (Urban Group), Rose-Marie Strand (Folkets Bio) and Emma Scott (Screen Ireland) for Eurimages were impressed by the high quality of the projects presented, in particular by this dark and intricate story which fully immersed them in the world of the protagonist. More information is available in the press release and on the website of the event. 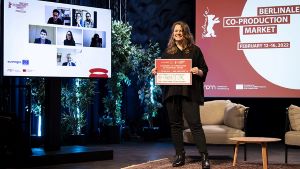 /2022 - Today, the jury of the Eurimages Co-production Development Award at the Berlinale Co-Production Market decided to reward the project entitled MY FAVOURITE CAKE to be directed by Maryam Moghaddam and Behtash Sanaeeha and co-produced by Caractères Production (FR) and Honare Khiyal (Iran). Impressed by the high quality of the selection with a strong presence of female directors and female driven stories, the jury was composed of Norwegian producer Maria Ekerhovd, Sata Cissokho in charge of acquisitions at Memento Film International and Pablo Pérez de Lema (Institute of Cinema and Audiovisual Arts), who represents Spain within Eurimages. The Eurimages Co-production Development Award of €20,000 went to a project that explores the real life behind closed doors of an aging woman who dares to live her desires in a country where women’s rights are heavily restricted. More information is available in the press-release and on the Co-Production Market website. 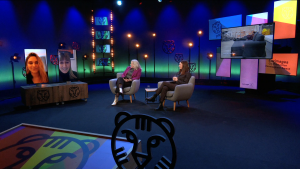 3/02/2022 - Last night at the 2022 online edition of CineMart which took place during the Rotterdam International Film Festival, the first Eurimages Co-production Development Award of the year, amounting to €20,000, went to the project LEAVE THE DOOR OPEN by Judita Gamulin to be produced by Rea Rajcic from the company Eclectica (Croatia). The jury composed of the director Babak Jalali, the producer Jelena Mitrovic and the Czech Eurimages representative Elena Kotová took this unanimous decision based on their connection to a very unusual and fresh story and their belief that it will be told impressively in the hands of this young filmmaker. For more information, see the press-release and the Festival’s website.

The jury also decided to give a Special Mention to a Swedish project entitled LOVE#NO FILTER to be written and directed by Mikael Bundsen and produced by Marie Kjellson from the company Kjellson&Wik.