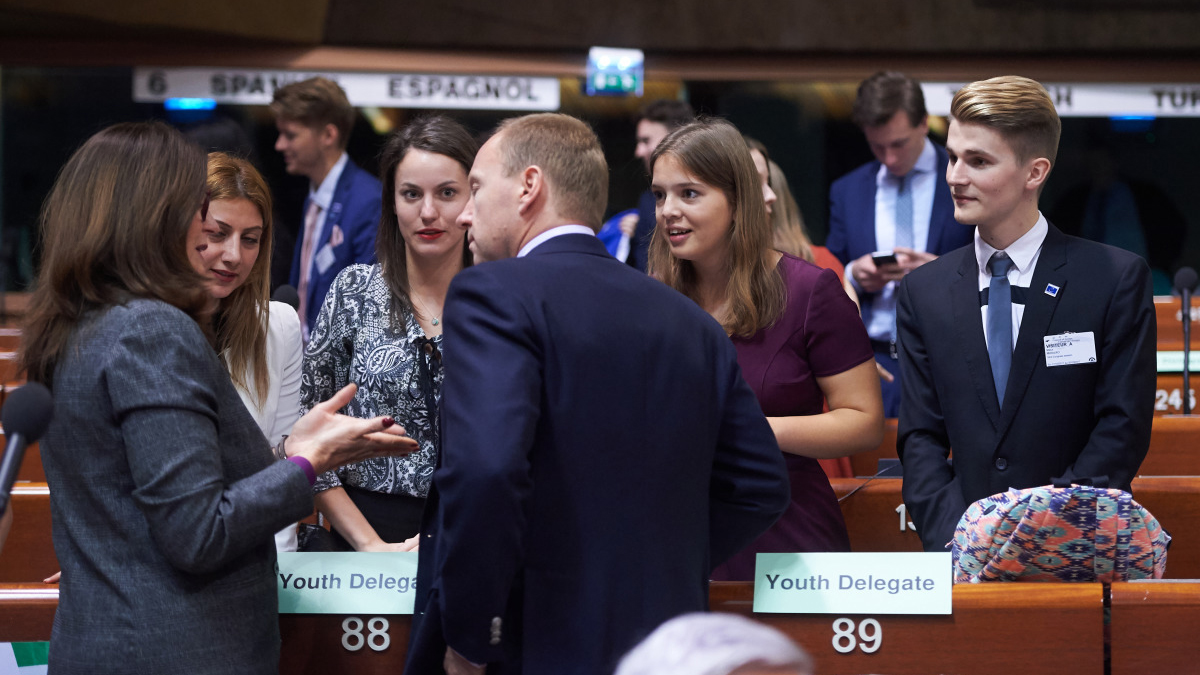 Particularly affected by the health crisis, young Europeans made their voices heard through the active participation of youth delegates throughout the 40th Session of the Congress (15-17 June 2021), marked in particular by the debates on the post-Covid policies in Europe's cities and regions.

During this 40th Session, youth delegates once again showed their commitment by actively participating in the debates with Congress members on all the issues on the agenda. Their input was particularly sought in the debates on the impacts of the Covid-19 pandemic on local and regional policies, but also on strategies to turn the crisis into an opportunity for sustainable development.

Working part-time for the Federation of Youth Parliaments in Switzerland, youth delegate Lea Hatt stressed the importance that the youth delegates attach to their participation in the work of the Congress, which allows them to represent the concerns of young people across the European continent, especially "in these extraordinary times".  She said the health crisis had hit youth employment hard and although cities had been responsive, the widening social inequalities had affected students most. Many of them were forced to return to their families and sometimes even interrupt their studies because they could not afford the rent. Their mental health has been affected not only by the health situation, but also by the anxieties linked to the climate crisis, especially as they have not been able to compensate for the isolation with sports or social activities. Nine of my fellow youth delegates," she stated, "conducted surveys in their cities in Albania, Bulgaria, Czech Republic, San Marino, Latvia, Sweden, Portugal, Turkey and the UK, revealing the unequal access to IT and digital infrastructure for young people. How do cities plan to respond to these challenges?" Lea Hatt insisted on the need to sustain the actions of the youth delegates who, during the pandemic, exchanged with each other and tried to find solutions to real situations. Citing the initiatives of youth delegates from Moldova, Bosnia-Herzegovina, Andorra, Serbia, Germany, Switzerland, Cyprus, Ukraine, etc., she underlined their willingness to participate in the updating of the Congress Urban Charter.

"Consider young people not as victims, but as actors of the post-Covid recovery by integrating them in the decision-making mechanisms of cities and regions".  After these wishes expressed by the youth delegate from Poland, Krystyna Bragiel, Vadim Kuznetsov, the youth delegate from Russia, illustrated the ability of young people to synthesise their priorities concerning the recovery plans with his very well thought-out intervention during the debate on the post-Covid regions.

"The most important thing would be to pursue the Sustainable Development Goals (SDGs)" he insisted. Hence the project by Krystyna Bragiel (Poland), who interviewed politicians, artists and civil society actors working on sustainable development projects. In this sense, the Congress could, according to Vadim Kuznetsov, propose that regions present voluntary plans for reducing inequalities in the implementation of the SDGs. This would make it possible to make citizens aware that the SDGs are not limited to environmental protection and the fight against global warming, but also include social, health and education policies. According to him, digitisation "whose vast potential has not yet been realised", would also be a major challenge for the regions. Many of the youth delegates' projects therefore focused on smart cities and participatory digital platforms. The potential of youth participation in regional governance has increased dramatically during the pandemic," concluded Vadim Kuznetsov. Cities and regions should seize this opportunity to make this trend sustainable and strengthen it. "Finally, the Russian youth delegate highlighted the importance for regions to pursue international cooperation in order to exchange good practices, but also to ensure investments to boost the post-Covid economy.

Following his intervention, Elisha Winckel, youth delegate from Luxembourg, echoed his words by insisting on the fact that regional authorities will need "political courage to overcome bad habits through greener development choices, but also by involving young people more in the decision making process."

The youth delegates took part in almost all the debates of the Congress, proving their ability to challenge the representatives of local and regional authorities to defend the interests of young people in the framework of housing, culture and tourism policies, but also human rights.

During the discussion on solidarity between regions, the young delegate Viviane Ogou (Spain) recalled, for example, the migration problem causing tensions between Spain and Morocco. "The regions must contribute to the best possible reception of migrants in accordance with human rights," insisted the Spanish youth delegate.

Following the intervention of the mayor of Budapest Gergely Karácsony, the youth delegate from Hungary, Dániel Franko, questioned him about the project to build a Chinese university in the centre of the Hungarian capital, which would deprive young people of a large university city, planned to alleviate the student housing crisis. The mayor expressed his support for the University City project by assuring that the municipality will not allow the construction of the Chinese university which is supported by the central government.

On the last day of the 40th session, during the debate on the draft resolution on the management of cultural heritage as a tool for local and regional development, youth delegate Alina Wenger (Germany) expressed the wish of young people to see more initiatives aimed at reducing the cost of rail tourism (such as Discover EU) and heritage visits for young people.