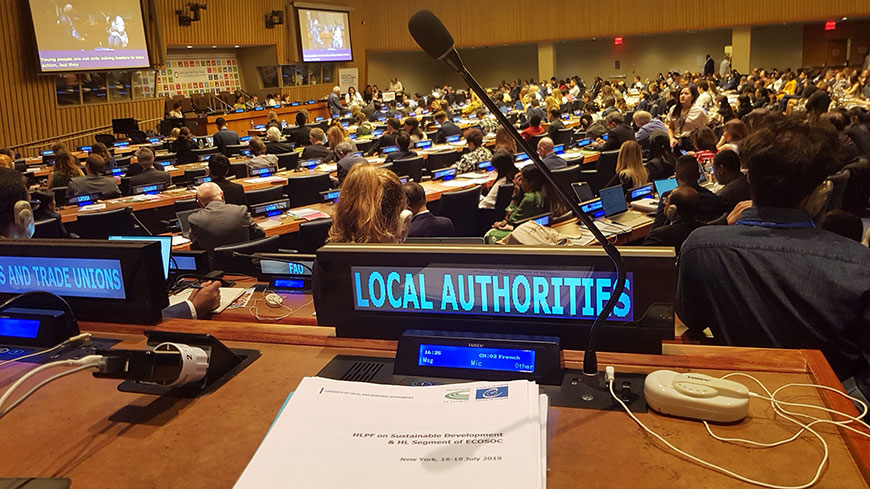 The Congress implements Sustainable Development Goals (SDGs) by promoting inclusive societies based on human rights and citizens’ rights. As the sole body responsible for monitoring the application of the European Charter of Local Self-Government, it regularly assesses the quality of territorial democracy and thus contributes to strengthening local authorities’ competences while ensuring that effective consultation mechanisms are put in place.

This was the main message conveyed by Congress President Anders Knape and Congress Secretary General Andreas Kiefer at several meetings during the High Level Political Forum in New York (16-18 July 2019).

In their discussions, they stressed that citizens’ trust in institutions is a requirement for the quality of democracy and the achievement of SDG 16 (Peace, justice and effective institutions). For this reason, the Congress has adopted an anti-corruption strategy covering several areas of public life: the fight against nepotism, transparency and open government, conflicts of interest, whistleblower protection, misuse of administrative resources during electoral processes and transparency in public procurement. It has also adopted the European Code of Conduct for all Persons involved in Local and Regional governance.

The Congress presented policy recommendations on several key areas covered by SDG 16 such as the promotion of human rights at local and regional level, the conditions for the exercise of the mandate of elected representatives, open data for better public services, the integration of migrants, and citizen participation.

The President of the Congress and the Secretary General also underlined the importance of institutional dialogue for the implementation of SDG 17 (Partnership for the achievement of objectives). The very structure of the Council of Europe - composed of the Committee of Ministers and other intergovernmental bodies, the Parliamentary Assembly, the Congress of Local and Regional Authorities, the Commissioner for Human Rights, the Conference of International NGOs and the European Court of Human Rights - facilitates partnerships with and between national, regional and local authorities, as well as civil society in the 47 member states and beyond. Within the Council of Europe, the Congress plays an active role in encouraging co-operation at all levels, in particular between national governments and elected local and regional authorities, between NGOs and elected officials and between local elected officials and citizens.

The Congress also co-operates closely with national associations of local and regional authorities. This partnership makes it possible to establish a truly inclusive dialogue; that is why the Congress is redoubling its efforts to strengthen these associations and develop their efficiency and autonomy.

In all its activities the Congress regularly works with international organisations representing local and regional authorities, such as United Cities and Local Governments (UCLG), with European organisations, in particular the European Committee of the Regions (CoR), the European Conference of Regions with Legislative Powers (CALRE), the Assembly of European Regions (AER), the Council of European Municipalities and Regions (CEMR) and the Association of European Border Regions (AEBR), and with the PLATFORMA network.

The Congress' approach to the Sustainable Development Goals is based on three key principles: achieving SDGs is the shared responsibility of all levels of government; local and regional authorities must have the necessary competences and financial autonomy to achieve the goals in their respective areas; citizens must always remain at the heart of the action.