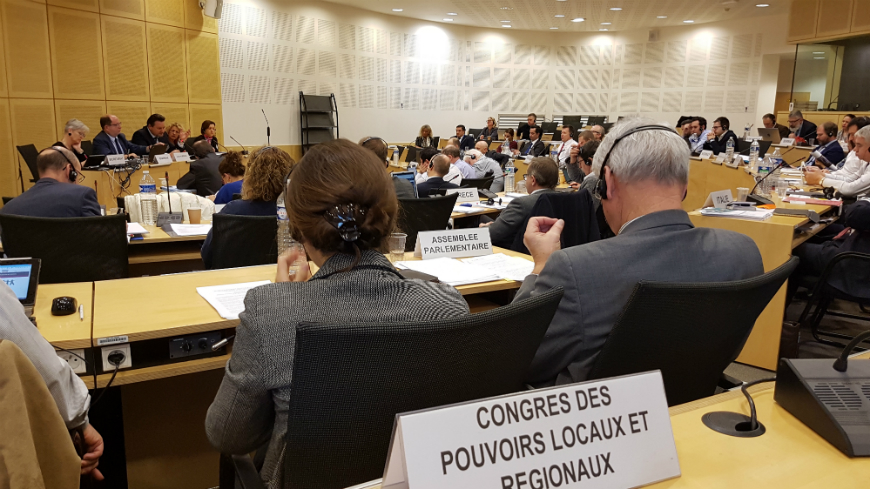 Referring to the 30th Anniversary of the entry into force of the European Charter of Local Self-Government, he reaffirmed his conviction that the Charter would remain a fundamental tool for member States seeking to develop shared governance. He stressed the Congress’ role in ensuring the Charter’s implementation, and outlined the five main axes of the Congress’ activities: as a forum of political exchange; as a consultative body for the Committee of Ministers, when new policies or legal instruments are drafted for the local level; as a monitoring body, including the observation of local and regional elections; as a body carrying out operational activities; and not least as a force for outreach, the most recent example being the publication of the Congress “Human rights handbook”.

“Member states are currently in a period of reforms,” he continued. “But local democracy is a shared responsibility for all actors, national governments, national parliaments and local and Regional Authorities and their associations. We need to listen to all stakeholders concerned. The importance of cooperation between CoE bodies as well as the national and local level is therefore paramount", he underlined referring to the recent Parliamentary Assembly of Council of Europe report on "The role of national parliaments in successful decentralisation processes" presented to the CDDG by spokesperson Jean-Pierre GRIN (Switzerland, ALDE).

Andreas KIEFER drew attention to two recent Congress reports that tied in with this, the “Consultation of local authorities by higher levels of government”, presented by Congress President, Anders KNAPE, at the November Session and “Coping with the debt burden”, on local authority finance. To tackle such issues, he emphasized the importance of alignment with the political and legal framework during the consultation process. “The standard for monitoring is the Charter. We are proud to act as ‘critical friends’, as a cohesive monitoring body. We must recognise the importance of cooperation at all levels to ensure democratic governance.”

“The Congress will continue to contribute to the work of the CDDG on public ethics,” Mr. KIEFER concluded. Participating member States expressed their gratitude for the Congress’ work and the input from the Congress members involved.