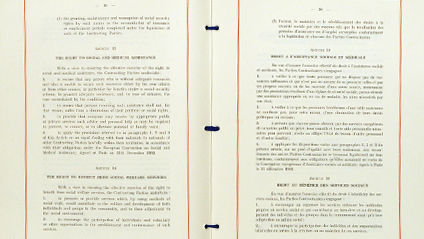 The Convention for the Protection of Human Rights and Fundamental Freedoms, better known as the European Convention on Human Rights, was signed in Rome (Italy) on 4 November 1950 by 12 member states of the Council of Europe and entered into force on 3 September 1953.

It was the first instrument to give effect and binding force to certain of the rights stated in the Universal Declaration of Human Rights.

It was also the first treaty to establish a supranational organ to ensure that the States Parties fulfilled their undertakings. The Convention was a milestone in the development of international law. Once states had accepted that a supranational court could challenge decisions taken by their own courts, human rights de facto gained precedence over national legislation and practice.

Any individual, group of individuals, company or non-governmental organization can apply to the Strasbourg Court, provided that they have exhausted all domestic remedies.

In order to join the Council of Europe, a State must first sign and ratify the European Convention on Human Rights, thus confirming its commitments to the aims of the Organization, namely the achievement of greater unity between its members based on human rights and fundamental freedoms, peace and respect for democracy and the Rule of Law.