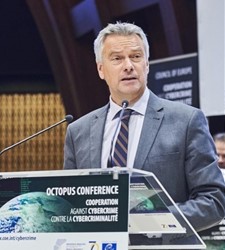 Patrick Penninckx has spent the last 30 years at the Council of Europe, focusing on transformation processes in the organisation, developing partnerships with other international organisations and national partners.

Currently heading the Information Society Department under the Directorate General Human Rights and the Rule of Law, Patrick coordinates standard-setting and co-operation activities in the fields of media, internet governance, data protection and cybercrime. He is also responsible for projects related to public-private partnerships and cooperation with business partners.

He is a confirmed keynote speaker in international conferences and colloquia organised by governments, parliaments, international organisations (OSCE, United Nations, UNESCO) and regional organisations throughout the world (OAS - Organization of American States, Organisation Internationale de la francophonie), civil society, the academic world, independent authorities, press councils, representative organisations of journalists and business. He acquired broad experience in the law-making field, in the development of hard and soft law at pan-European level on issues such as the protection of journalists, the role of internet intermediaries, development of public service media, promotion of quality journalism and other areas as well.

P. Penninckx led the Information Society Department in a large number of studies on most contemporary topics, such as filtering and blocking of illicit content on the internet, self-censorship of media and journalists and chilling factors to freedom of expression, disinformation, the role of the media in times of crisis, quality journalism and investigative journalism, as well as media literacy. His professional focus encompasses areas such as freedom of expression, the safety of journalists, sound internet governance, international standards in data protection, action against cybercrime and the impact of AI on human rights.

Following the Russian invasion in Ukraine, the Information Society Department focused its work on journalism in times of war and conflict. P. Penninckx launched actions in support of war Reporters, Ukrainian journalists and public service media.

Patrick Penninckx on the international conference in Ljubljana

Media pluralism in the digital environment

What are the current threats and challenges for media freedom and journalism?

Patrick Penninckx explains the work carried out by the Steering Committee on Media and Information Society.