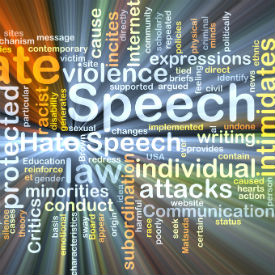 Over the years, the Council of Europe has worked in multiple manners to counter hate speech. The media and internet division’s work in this area is based on a “freedom of expression perspective” which focuses on co-operation with member states in preparing, assessing, reviewing and bringing in line with the European Convention on Human Rights any laws and practices that place restrictions on freedom of expression. The division also looks to foster media and internet literacy throughout all member states, to raise awareness about hate speech and the risks it poses for democracy and individuals, to reduce the levels of acceptance of hate speech as well as to develop consensus on European policy instruments combating hate speech. Hate speech has no particular definition in international human rights; it is a term used to describe broad discourse that is extremely negative and constitutes a threat to social peace. According to the Committee of Ministers, hate speech covers all forms of expressions that spread, incite, promote or justify racial hatred, xenophobia, anti-Semitism or other forms of hatred based on intolerance. Along with the development of new forms of media, online hate speech has been brought about. Hate speech in the online space requires further reflection and action on the regulation and new ways for combating it.

Recommendation 1805 (2007) on blasphemy, religious insults and hate speech against persons on grounds of their religion

Recommendation No. (97) 21 on the media and the promotion of a culture of tolerance

Living together: A handbook on Council of Europe standards on media’s contribution to social cohesion, intercultural dialogue, understanding, tolerance and democratic participation, April 2009