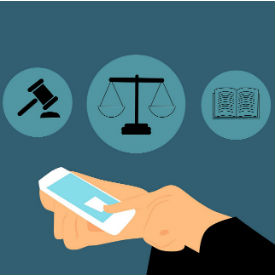 The Internet has radically transformed the way we access information and communicate - creating new opportunities for strengthening democracy. Unfortunately it can also be used to restrict human rights and to commit crimes. Revelations on mass online surveillance and regular reports on abuses of the rights to privacy and free expression clearly show the need to effectively protect human rights on the net. The Council of Europe works with governments, the private sector, civil society and other actors to shape the Internet as a safe and open environment where freedom of expression, freedom of assembly and association, diversity, culture and education can flourish.

People rely on the Internet to obtain information, communicate and associate with each other, and for many everyday activities. They have a legitimate expectation that the Internet will be up and running, and are entitled to enjoy affordable and safe access to the net.

The Internet is of critical value for democracy. The Council of Europe recognises and promotes the public service value of the Internet, and encourages its member states to ensure equal access for everyone. It is also working on the promotion of digital education and culture, for example by promoting the exchange of best practices on the digitalisation of culture.

Making the Internet more accessible can help people with disabilities, the underprivileged and the elderly to connect more easily with the world – from voting to buying goods. A number of Council of Europe recommendations aim to improve the participation of disabled people in public life, increase their educational opportunities, and involve them in the development of new technologies adapted to their needs.

The Council of Europe works with governments and other authorities, journalists, civil society and the private sector to ensure that the right to freedom of expression is guaranteed to everyone both offline and online.

The Organisation has issued guidelines to its member states to make sure that any restrictions to freedom of expression, such as through Internet blocking and filtering, comply with Article 10 of the European Convention on Human Rights. Council of Europe policies also promote network neutrality, the global free flow of information on the Internet and the universality and integrity of the Internet’s infrastructure.

The Council of Europe has created a platform through which media freedom NGOs can report challenges to the safety of journalists and media freedom, and restrictions of freedom of expression on the Internet. The information collected is used to trigger responses by Council of Europe ́s bodies and to engage in a dialogue with the authorities concerned to address them.

Through his annual reports on the State of Human Rights in Europe, the Council of Europe Secretary General plays an increasingly active role to assess the protection of freedom of expression in the 47 member states.

Aiming to strengthen states’ commitment to apply the Council of Europe’s freedom of expression standards, in 2016 the Organisation has adopted recommendations on network neutrality, the safety of journalists and Internet freedom. It has developed Internet freedom indicators that states can use to assess their compliance with these standards.

The Council of Europe has also elaborated a comparative study on the laws and practices on blocking, filtering and removal of Internet illegal content in its 47 member states.

The Internet has changed how we handle personal data and share personal information with others, creating opportunities, but also risks.

Article 8 of the European Convention of Human Rights upholds the right to respect for private life. Another treaty, the Council of Europe data protection convention (Convention 108), safeguards individuals’ right to the protection of their personal data. This convention, which is the sole international treaty in this field, has been updated to ensure that its data protection principles are still in line with today’s needs.

The Internet knows no borders, and Convention 108, which is open to any country in the world, has the potential to become a global standard

Fighting crime on the web

With the Internet, new types of crimes have emerged that require specific criminal law responses.

The Budapest Convention on Cybercrime lays out a criminal justice framework to guide state policies in this field. It prescribes the minimum legal standards necessary for states to prosecute cybercriminals and tackle child pornography. It also contains safeguards for individuals’ rights when authorities secure electronic evidence for criminal justice purposes.

An additional Protocol criminalises racist and xenophobic acts committed through computer systems. The treaty is backed up by the Cybercrime Convention Committee that monitors its implementation and a Cybercrime Programme Office in Bucharest, Romania, that supports countries worldwide through capacity building programmes such as the GLACY project on Global Action on Cybercrime.

The Convention on the Prevention of Terrorism also covers the virtual world, asking states to establish criminal offences for public provocation to commit a terrorist offence, recruitment and training of terrorists. An additional protocol contains measures to tackle the so-called “foreign terrorist fighters.”

The Council of Europe has adopted the first international treaty on the counterfeiting of medical products and similar crimes involving threats to public health, the MEDICRIME Convention, which aims to stop the sale of counterfeit medicines, both offline and online.

The Pompidou Group, the Council of Europe’s group of experts on drugs’ policy, is working to curb drug sales and deliveries via encrypted Internet platforms.

The Internet is a great tool for children and young people to learn, communicate and enjoy their free time. To help children understand the Internet and acquire the necessary skills to become digital citizens, the Council of Europe has developed, for example, the online educational game Through the Wild Web Woods, an Internet literacy handbook and a tablet application to empower children, parents and educators in making full and safe use of the potential of ICT and digital media.

The use of the Internet to harm children sexually is a serious concern. The Council of Europe Lanzarote Convention criminalises the sexual exploitation and abuse of children, including the use of new technologies to abuse them, for example by adults soliciting children in chat rooms or online game sites for sexual purposes.

The Lanzarote Committee is currently analysing trends in sexual exploitation and abuse of children, in particular those where offenders make use of new technologies, in order to propose guidance to its Parties to fight them more efficiently.

In order to fight the flow of xenophobic and intolerant messages inundating cyberspace, the Council of Europe has launched the No Hate Speech Movement, which aims to help young people and youth organisations recognise and act against such human rights abuses. A recommendation issued by the Council of Europe’s anti-racism body ECRI contains guidelines for states on how to prevent hate speech, including online, support those targeted by it, and deal with its consequences.

The Istanbul Convention addresses violence against women, including the role of the communication technologies sector and the media in contributing to the prevention of violence and enhancing respect for women and girls. 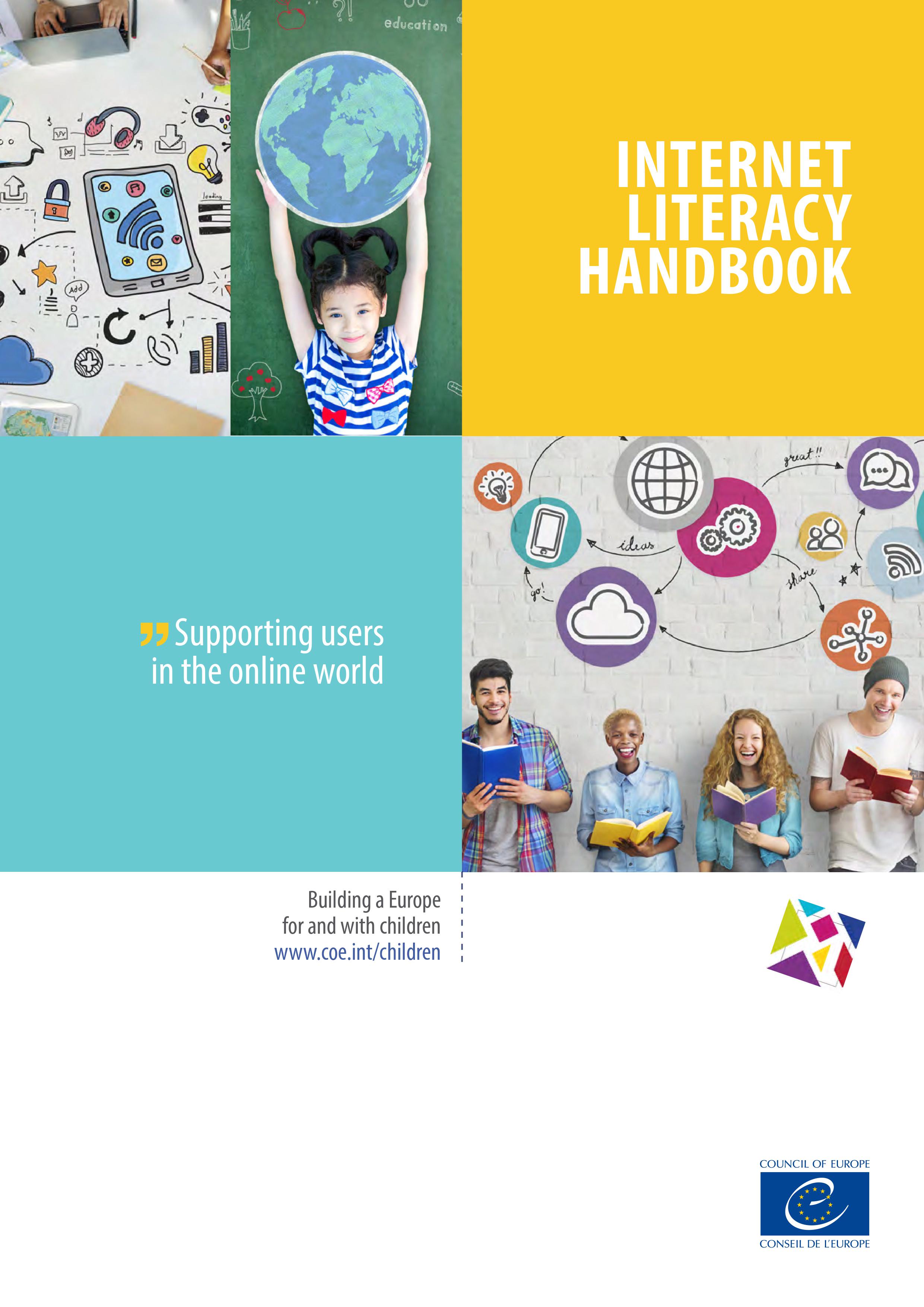 Internet Literacy Handbook  - This tool now provides an even richer source of quality information for children, parents, teachers and policy makers of the 47 member states to be able to make the most of the Internet and to prepare future generations to use the Internet safely and confidently.

Through the Wild Web Woods - An online game for children set in a fun, fairy tale environment. 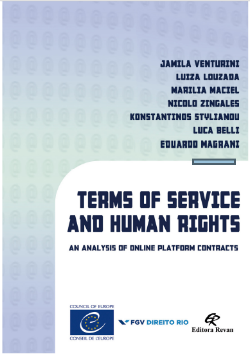 Terms of service and human rights: an analysis of online platform contracts

The finding of this report demonstrate just how difficult it can be for Internet users to understand and thereby consent to the terms of service of online platforms in order to make fully informed decisions on issues which affect their human rights such as content restriction policies and processing of personal data. 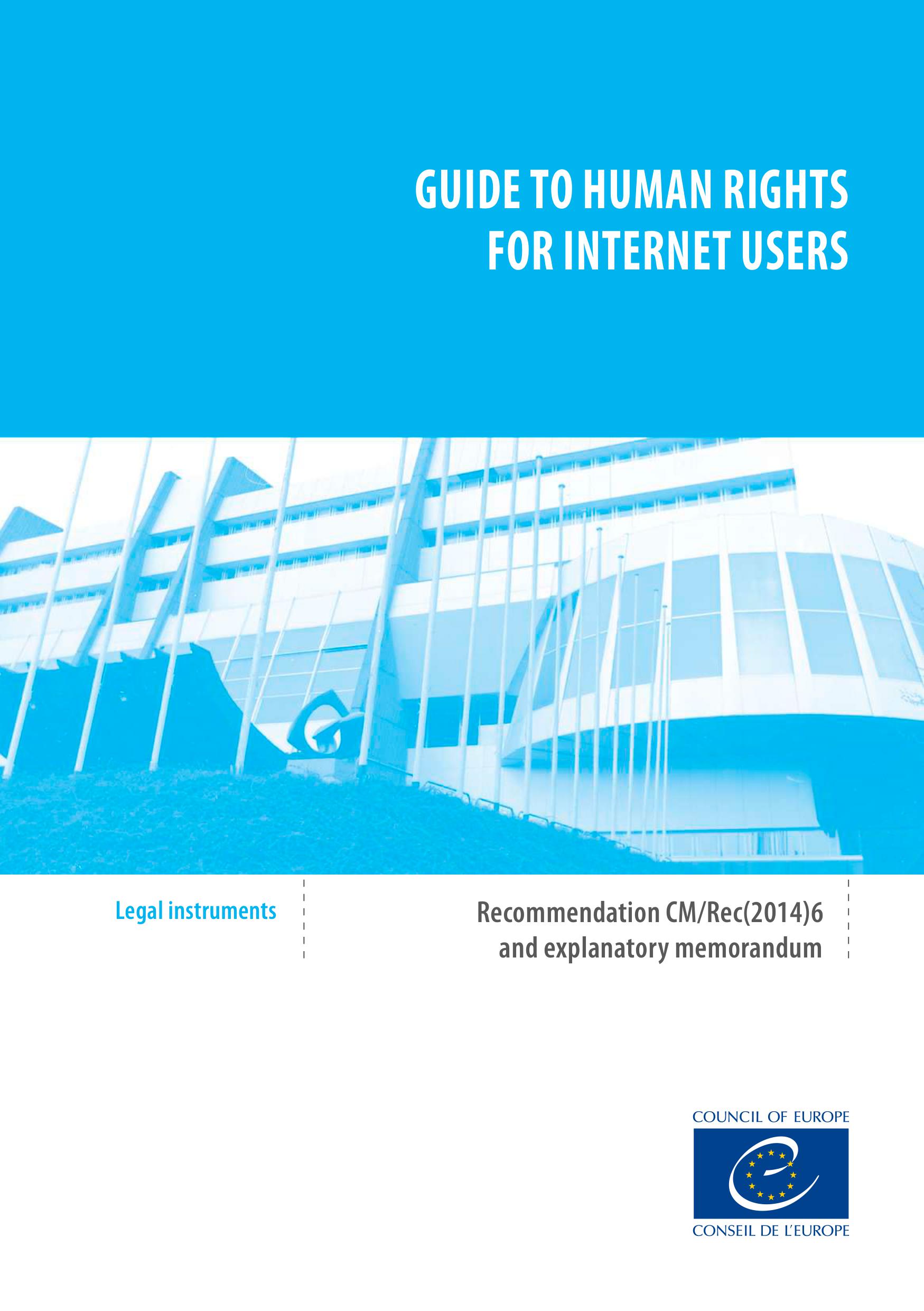 The Council of Europe has released the Guide to human rights of internet users, designed as a tool to: be used by individuals and to be relied upon when facing difficulties in exercising their rights; help governments and public institutions to discharge their obligations to protect, respect and remedy human rights; be a kick-starter for national discussions on protection and promotion of human rights of internet users and their empowerment in internet environments; promote corporate social responsibility by encouraging the private sector to act responsibly and with respect for the human rights of individuals that they contract with. It exists in several languages.

The Guide was developed with broad multi-stakeholder consultation with governments, private companies from the telecommunications and online service providers sectors, civil society organisations, and representatives of the technical community and academia. It is based on existing human rights contained in the European Convention on Human Rights and other Council of Europe conventions and legal texts, as well as on certain interpretations of these rights by the European Court of Human Rights.

Learn more about the Guide