Meeting in Lviv of the Ukrainian Alliance for Roma Inclusion

The Ukrainian Alliance of Cities and Regions for Roma Inclusion held a meeting, on 26th February 2019, with Alliance members, local and regional elected officials, parliamentarians and NGO representatives, in Lviv, Ukraine.

In the context of the attacks against Roma in 2018 in various Ukrainian cities, participants discussed potential measures that can be taken to prevent such acts from occurring at the local level: the engagement of public authorities, the implementation of strategies, and cooperation between national and local authorities.

Participants also examined ways in which to combat stereotypes and convey positive messages. This is the main aim of the Declaration against Anti-Gypsyism, launched by the Congress of the Council of Europe, to give local and regional elected representatives, from the 47-member States, the opportunity to take a stand against discrimination towards Roma. Alongside this meeting, several Ukrainian elected officials signed the Declaration, which has in fact already obtained more than a hundred signatories.

Members of the Ukrainian Alliance additionally discussed the results of several initiatives previously carried out to promote Roma inclusion. They namely examined projects that have been implemented in different regions in Ukraine, that focus on education, employment, mediation and participation in decision-making processes.

The meeting was opened, and hosted, by Andriy SADOVYI, Mayor of the municipality of Lviv. Among the speakers were: Svitlana SIMCHYSHYN, Representative of the Ukrainian Ombudsman in the western regions of Ukraine, and Irina SUSLOVA, Member of the Ukrainian Parliament, and Chair of the Sub-Committee on Gender Equality and Non-Discrimination. 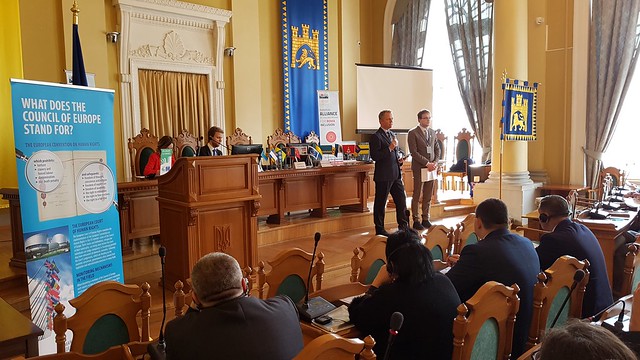