"Rebuilding citizens’ confidence in the political system is the only way to reverse the spread of disinformation”, says Congress President 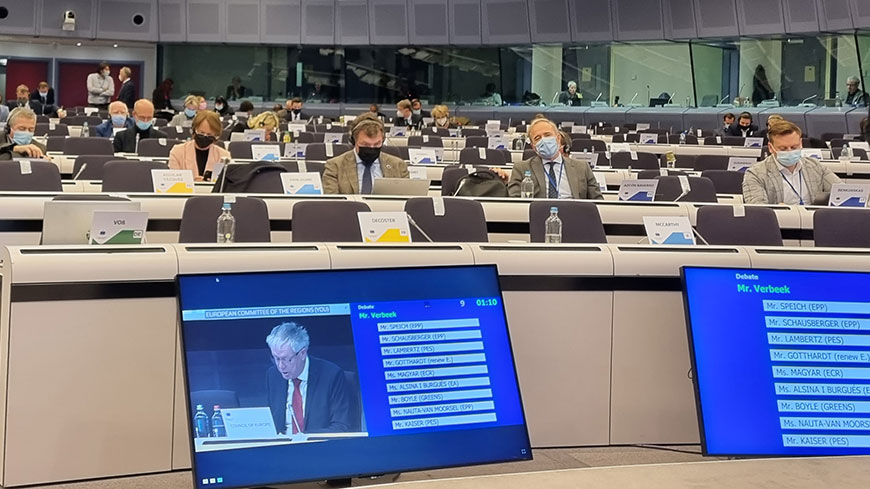 “Local and regional elected representatives throughout Europe are constantly confronted with the rise of fake news and hate speech that have powerful repercussions on their work and on the functioning of democracy,” stressed Congress President Leendert addressing the 147th session of the European Committee of the Regions in Brussels, Belgium, on 2 December 2021. Delivering a keynote speech during the debate on the "Fight against disinformation to ensure a functioning and resilient democracy at all levels", he underlined the leading role of local and regional authorities in responding to this threat.

The Congress President recalled that the issue of disinformation is part of a broader picture of multiple crises: loss of citizens’ confidence, deterioration of the link with public institutions, anti-liberal tendencies, authoritarian temptations, resurgence of nationalism, climate change, technological developments, migration challenges, globalisation and the crisis of representative democracy. In addition to these challenges, the Covid-19 health crisis has put to a rigorous test the institutions of governance at all levels.

"We are witnessing the emergence of a “clash” society in which confrontation is the norm, with new forms of individual and collective violence," warned Mr Verbeek. "Trust in fake news begins with the mistrust in public authorities and the information they provide. Rebuilding citizens’ confidence in the political system is therefore the only sustainable way to reverse the spread of disinformation," he said, emphasising the importance of citizens’ access to reliable information.

Faced with a rapidly changing information landscape and the widespread use of the internet, social media and blogs competing with traditional media, President Verbeek called for the "taming" of technology. "A new social culture surrounding internet must be created in order to promote social responsibility, establish clear rules on what is appropriate online behaviour, and raise awareness about the risks," he stated.

To explore how fake news and hate speech affect local democracy, the Congress has engaged in a scientific co-operation project involving academics and experts from university institutions in Ludwigsburg, Budapest, Bucharest, Kosice and Vienna. Based on the analysis of experiences from local authorities, the project will result in a report to be presented to the Congress session in March 2022.

"We, the Congress and the Committee of the Regions as institutions representing these authorities, must use our networks for pooling experiences and disseminating good practice to counter the spread of disinformation," concluded President Verbeek.