"In times of crisis, the Charter provides a legal basis for member States to defend the principles of local democracy," said the Congress Secretary General. 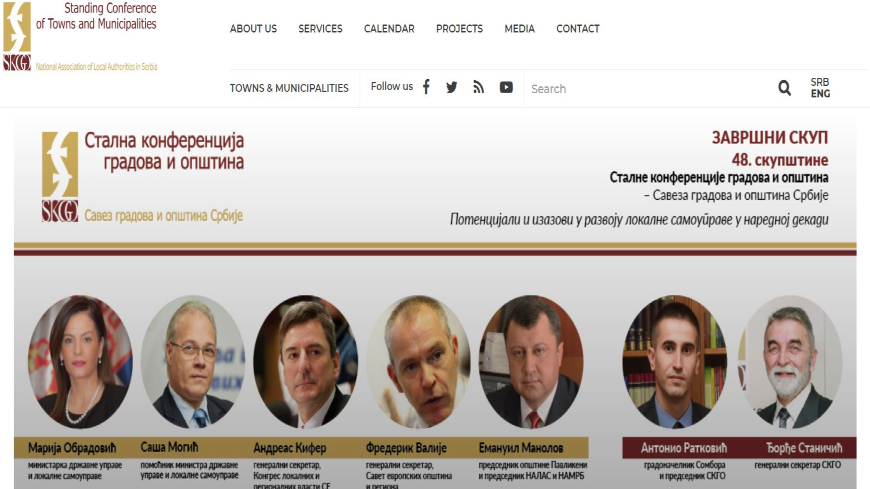 "The Congress stands ready to engage in a political dialogue with the Serbian authorities in order to further implement the reforms of local self-government under way. The provisions of the European Charter of Local Self-Government and the latest Congress monitoring report and Recommendation 403 (2017) on local and regional democracy in Serbia are the appropriate framework. Together with the government and with the Standing Conference of Towns and Municipalities (SCTM) additional concrete thematic activities such as public ethics, transparency, the fight against corruption, gender equality or youth participation could be developed and implemented," said Congress Secretary General Andreas Kiefer on the occasion of his participation in the 48th General Assembly of the Standing Conference of Towns and Municipalities of Serbia on 17 December 2020.

"In times of crisis, such as the Covid-19 pandemic, the Charter also provides a legal basis for member states to defend the principles of local democracy and safeguard the functioning of democratic institutions," added the Secretary General, stressing that the pandemic has highlighted the need for multi-level decision-making to ensure the efficiency and effectiveness of the measures applied to fight the virus. "The role of national associations in consultation and dialogue with national governments is therefore more important than ever," said Mr. Kiefer, recalling that the Charter stipulates the need to establish strong and permanent consultation mechanisms between national, regional and local authorities, so that they can jointly contribute to decision-making.

The Secretary General pointed out that the cooperation activities of the Congress are an extension of its statutory work while welcoming the active participation of the members of the Serbian delegation to the Congress and that of the Standing Conference of Cities and Municipalities as rapporteurs or as members of election observation missions, but also in the cooperation activities carried out in other countries, notably in Ukraine and Armenia. "The field work of the Congress is made possible by the active cooperation of our members, mayors and councilors and their national associations of local authorities”, Mr Kiefer recalled, specifying that the latter are natural and essential partners of the Congress.

Finally, he mentioned the publication by the Congress of practical guides for elected representatives to help them fulfil their mission to citizens, such as the six volumes of the "Public Ethics" collection and the Handbook on Human Rights at the Local Level. "The Congress also works to promote the exchange of experiences and practices between local elected officials. It has thus, throughout this pandemic, gathered on its website the initiatives and good practices put in place by local and regional actors in member states, enabling local elected representatives from other countries to draw inspiration from them. "concluded Mr. Kiefer.