The Council of Europe opened its Programme Office in Venice in 2011. The signature of the agreement with the City of Venice took place on 1 June of that year.

On 14 June 2017 the Italian Ministry of Foreign Affairs and the Council of Europe signed a seat agreement. The agreement acknowledges the Venice Office’s international legal status, thus facilitating the extension of its activities in areas such as the protection of human rights, the rule of law and international cooperation.

Human rights, democracy and the rule of law are the foundations of the European project. To these the Council of Europe has contributed since its foundation in 1949. Venice, through its institutions and its numerous higher education centers and research resources, shares and supports these values. The city, with its lagoon, is a World Heritage Site. It has always been a melting pot of cultures and a meeting point of peoples and civilizations, with a long-standing commitment to dialogue and mutual exchange between countries and communities.

The Council of Europe Programme Office in Venice focuses its activities on themes relevant to both the organisation and the city of Venice, raising awareness and informing on such issues as the integration of minorities, gender equality, citizens’participation, the role of women in the Euro-Mediterranean context, the integration of Roma and Remembrance Day.

The Office has partnered with the Veneto Region in a number of projects in the area of culture and cultural heritage. The Council of Europe signed local cooperation agreements with the Venice International University (VIU) for activities linked to study and research on global issues, the European Inter-University Center for Human Rights and Democratization (EIUC) for events linked to the study and promotion of human rights and fundamental freedoms and with Ca' Foscari University for activities linked to human rights, democracy, culture and cultural heritage.

The Council of Europe Commission for Democracy through Human Rights (Venice Commission) holds its meetings in Venice four times a year. 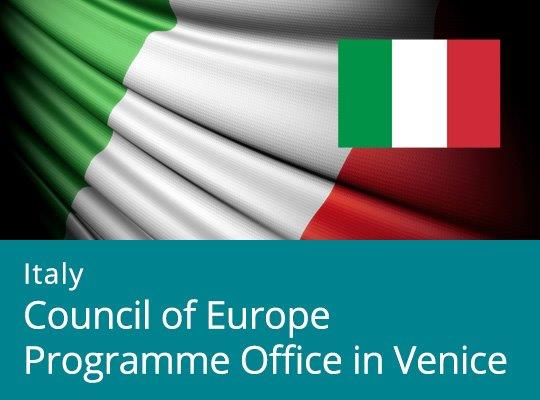