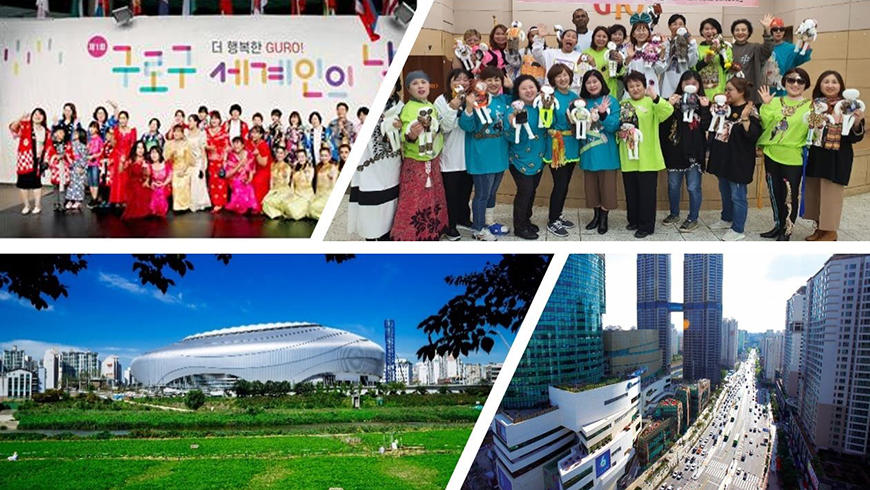 Guro-gu is a district of Seoul, South Korea, counting a population of around 433.765 inhabitants (2019 statistics). In 2019, the number of migrants or persons with migrant roots residing in Guro-gu was estimated at 54,089 persons, of which 45,686 had not yet acquired Korean nationality.

Guro-gu has an important digital Industrial Complex which played a leading industrial role mainly with textile manufacturing, dressmaking and other labour-intensive industries, and that has been rapidly changed into an IT industrial complex, playing a pivotal role in the economic growth of the South Korea's development era.

In terms of sustainability, twenty-one percent of the total area of Guro District is a restricted zone to be used as a greenbelt with the only arboretum in Seoul. The zone is changing into a lively district as large labour-intensive factories are moving from the area.

Interestingly enough, Guro-gu has an "e-government" system launched back in 2007 on the occasion of an international forum under the title “Promoting Democracy and Regional Development". The Guro Declaration adopted during the forum aims to set up a portal site for e-government development with the view to bridge the digital divide among the cities of the world. This practice has been recognised for providing a new important step in the development of e-democracy.

Its experience in e-governance will certainly benefit the entire ICC network. Welcome to Guro-gu in the ICC family!