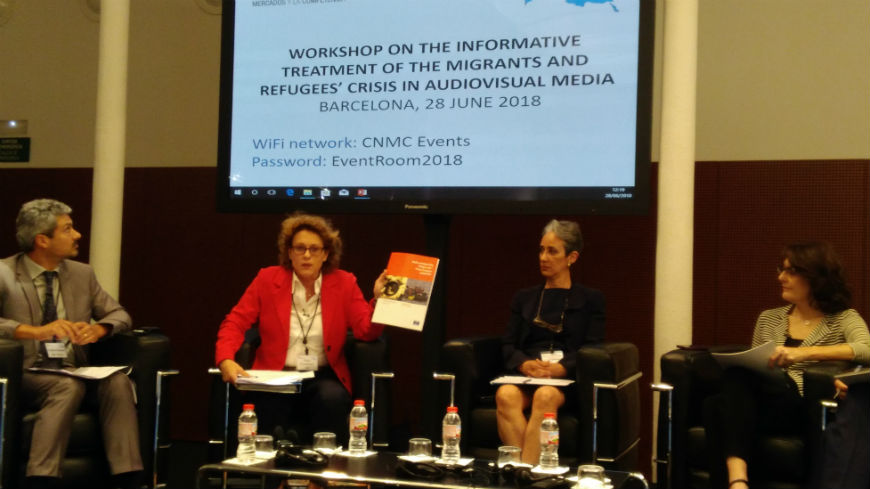 Silvia Grundmann, Head of Media and Internet Division, Council of Europe at the Panel Discussion "For an accurate representation of migrants and refugees on the audiovisual media"

Migrants, Refugees, Asylum seekers – How do media portray them? What picture of migration European and Mediterranean citizens are exposed to? What is the role of media regulators?

Media regulatory authorities, civil society, audio-visual media and major international organisations from both shores of the Mediterranean have gathered in Barcelona on 28th June 2018 to address these questions and to outline shared guidelines on how to report on one of the key challenges of our time.

The “Workshop on the Informative Treatment of Mediterranean Migrant and Refugee Crisis on the Audiovisual Media” was organised by the Spanish media regulatory authority (Comisión Nacional de los Mercados y la Competencia - CNMC) and the Network of Mediterranean Regulatory Authorities (MNRA).

Silvia Grundmann, Head of Media and Internet Division presented the Council of Europe’s work in this field, notably two reports commissioned "Media coverage of the 'refugee crisis': A cross-European perspective" and “Spaces of Inclusion”, an explorative study on needs of refugees and migrants highlighting the important role of community media.

Vivid and intense discussions emphasised the need for better responses: Council of Europe standard-setting and implementation through cooperation activities was affirmed to be instrumental for Europe and beyond.

Report Media coverage of the 'refugee crisis': A cross-European perspective