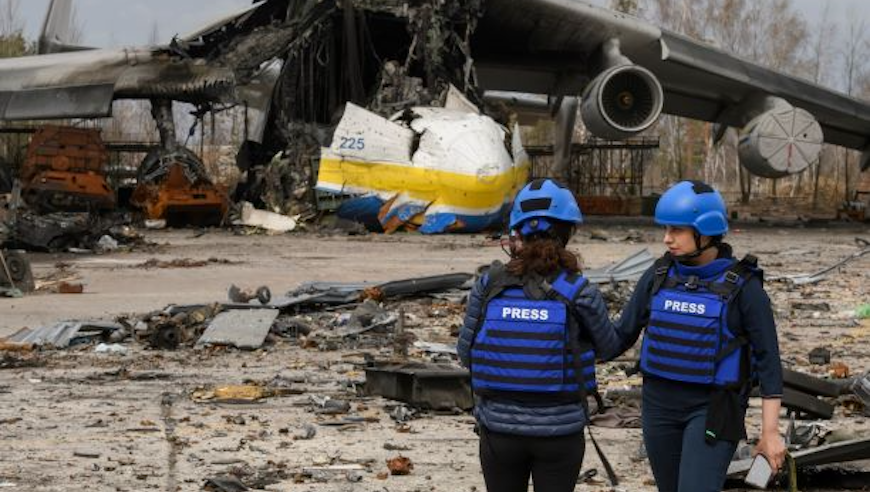 photo exhibition #OntheFrontlineOfTruth “The Russian war of aggression against Ukraine: work of journalists”

The photo exhibition #OntheFrontlineOfTruth “The Russian war of aggression against Ukraine: work of journalists” was presented on 21 June in Strasbourg. It is available during the PACE summer session and is located at the second floor of the Council of Europe’s Palais de l’Europe.

The aim of this exhibition is to turn attention to the crimes committed by the Russian Federation against media and journalists, and to highlight the extremely dangerous conditions of their work.

The pictures of heroic journalists at work show the excessive brutality in wartime: military deliberate attacks on civilian infrastructure, peaceful civilians, their torturing, killing. Russian troops constantly use heavy weapons and ammunition designed to kill civilians indiscriminately on a large scale.
During the opening ceremony, the solidarity with Ukrainian media professionals was expressed by Marija Pejčinović Burić, Secretary General of the Council of Europe, Tiny Kox, President of the PACE, Maria Mezentseva, Chairperson of the Ukrainian Delegation to the PACE, Ambassador Borys Tarasiuk, Permanent Representative of Ukraine to the Council of Europe, and Yevhenia Kravchuk, member of the Ukrainian Delegation to the PACE.

The exhibition is organised by Ukrainian Delegation to the PACE, Permanent Representation of Ukraine to the Council of Europe, PromoUkraїna and CSO “Institute of Mass Information”.