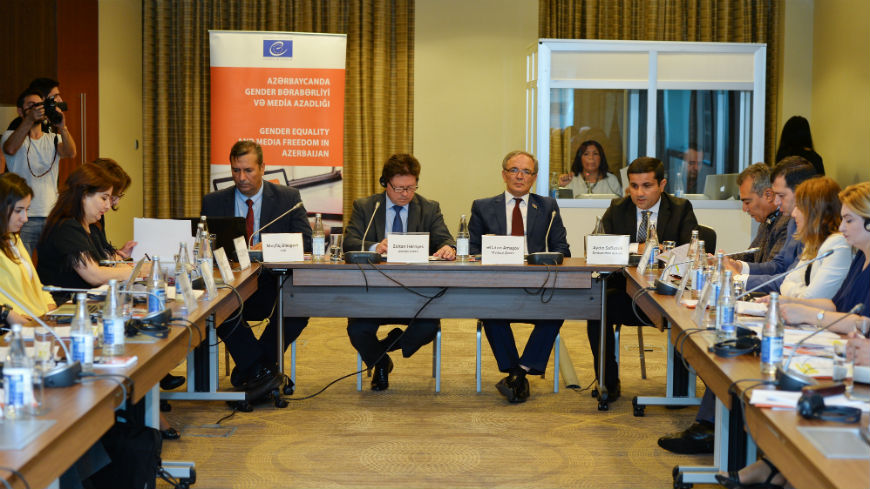 On 3 October 2018 the Council of Europe Project “Gender Equality and Media Freedom in Azerbaijan” organised a round table on “Gender equality and media” to discuss the Code of Professional Ethics for Azerbaijani journalists revised from a gender equality perspective within the Project in Baku. The draft amendment introduces the new Principle named “Promotion and protection of the principle of non-discrimination and gender equality” into the Code of Professional Ethics for Journalists .

Ambassador Zoltan Hernyes, Head of the Council of Europe Office in Baku addressed the audience at the opening session and said that “this is the very first project specifically dedicated to the issue of gender equality and media freedom and ever implemented in a member state of the Council of Europe. Therefore, if its implementation is successful, it might serve as a model for other CoE member states as well.” Mr Aflatun Amashov, Head of Azerbaijani Press Council and Member of Milli Majlis (Parliament) highlighted the importance of the amendment and mentioned that the Board of the Press Council will consider the amendment to the Code of Ethics for approval in one of its next meetings.

About 35 representatives of state authorities, members of the Board of the Press Council, experts on media and gender, as well as journalists, representatives of civil society and academia took an active part in the round table and made their suggestions to the amendment.

Media coverage of the round table in Azerbaijani media: