Study visit of journalists from the MENA region to Tunis: lively debate on women's rights and gender representations in the media

A delegation of Arab journalists visited Tunis from January 27 to 31, 2020, as part of a study visit and experience sharing between counterparts from three South Mediterranean countries including Tunisia, the Algeria, Morocco and Lebanon.
Tunis 20 February 2020 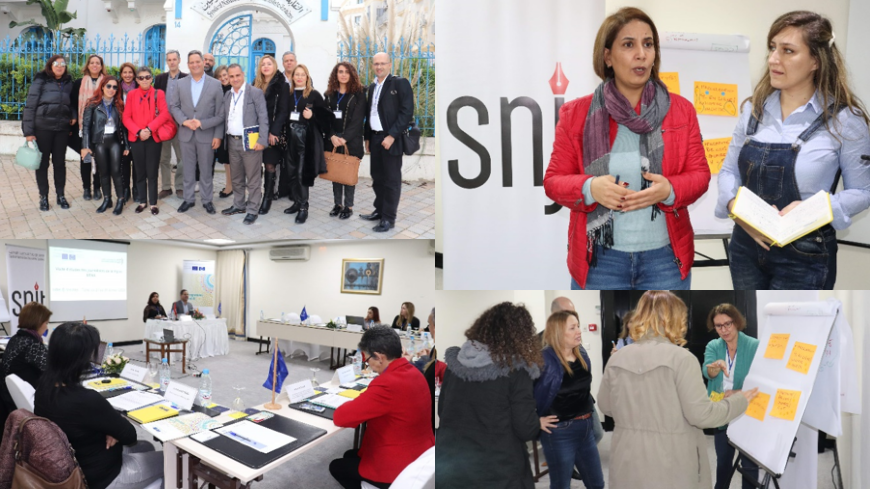 Within the framework of the joint program co-financed by the European Union and the Council of Europe, „Ensuring Sustainable Democratic Governance and Human Rights in the Southern Mediterranean (South Programme III)”, implemented by the Council of Europe, the Council of Europe organised, in partnership with the National Syndicate of Tunisian Journalists (SNJT), this study visit and networking meeting for media professionals and representatives of journalists' unions in the Maghreb-Mashreq region to raise their awareness and in particular to strengthen their capacities to produce ethical journalistic content and media treatment against stereotypes to best respond to the various challenges imposed by their respective contexts.

To that end, leading local and international experts facilitated technical training sessions, which took place during the five days of the visit, to highlight the different local legal frameworks governing press freedom and ethical charters as well as the Council of Europe mechanisms and instruments that prohibit all forms of discrimination and violence against women in the field, in the media and on the Internet. In particular, visiting journalists were sensitised to the importance of adopting self-regulatory mechanisms and internal codes of conduct to promote the equal representation of women and men in newsrooms, media leadership positions and in regulatory and self-regulatory bodies. In this regard, the journalists' delegation had the opportunity to observe closely the working methods and self-regulatory practices of some media institutions in Tunisia such as the National Syndicate of Tunisian Journalists (SNJT), the High Independent Authority of the Audiovisual Commission (HAICA), the national public television Watanya TV, and the private Radio Mosaïque FM.

Drawing on the Tunisian experience and to support efforts to enable effective regional collaboration in the fight against sexist discourse in media and electronic platforms in the MENA region, participants issued a list of recommendations calling for: