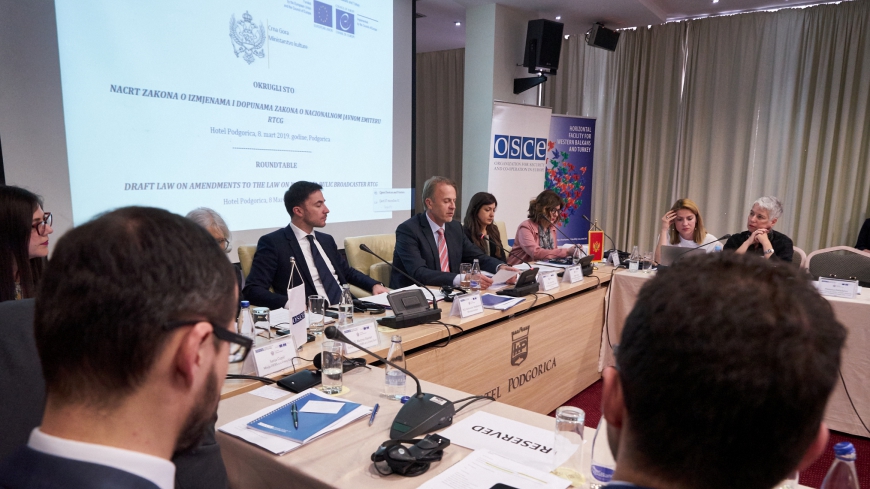 After preparation of JUFREX comprehensive analysis of media sector and providing legal opinions to two Draft media laws – Draft Law on Media and Draft Law on National Public Broadcaster (RTCG), the Council of Europe (CoE) and European Union (EU) have continued support to the reform process in Montenegro through participation of the CoE experts in the roundtable on Draft Law on RTCG, held on March 8, 2019 in Podgorica.

The event was organised in cooperation with the OSCE and Ministry of Culture of Montenegro and attended by representatives of the state institutions, media community, international organizations and diplomatic missions, as well as representatives of civil society organizations. Opening speeches were given by the Minister Bogdanović, Aivo Orav, Ambassador and the Head of Delegation of the EU to Montenegro, Maryse Daviet, Head of the OSCE Mission to Montenegro and Angelo Longo, Head of Operations, the CoE Programme Office in Podgorica – pointing out importance of a role of public broadcaster and harmonisation of national legislative and institutional framework with European standards in this field.

The main objective of the roundtable was to enable public discussion about proposed amendments and legal solutions and to inform all interested parties on the legal opinions delivered by Council of Europe international media experts.

After the introductory part, the CoE experts, Eve Salomon and Tanja Kerševan Smokvina welcomed the progress made by the Montenegrin authorities, incorporating a large number of their recommendations into the Draft Law, and emphasized that additional efforts should be made in terms of nomination of members of the RTCG Council and supervising the implementation of the Contract between RTCG and the Government.

At the end Lejla Dervisagic, Coordinator for the CoE expertise, concluded that the Council of Europe will continue to support this process and highlighted the importance of accessing all three drafts media laws together - on the media, on RTCG and on electronic media - in order to avoid any possible contradictions and ensure enabling environment for media and freedom of expression.

The Council of Europe and the European Union are providing support to media reform process in Montenegro through two joint programs: the Horizontal Facility for the Western Balkans and Turkey and Reinforcing Judicial Expertise on Freedom of Expression and the Media in South-East Europe (JUFREX).