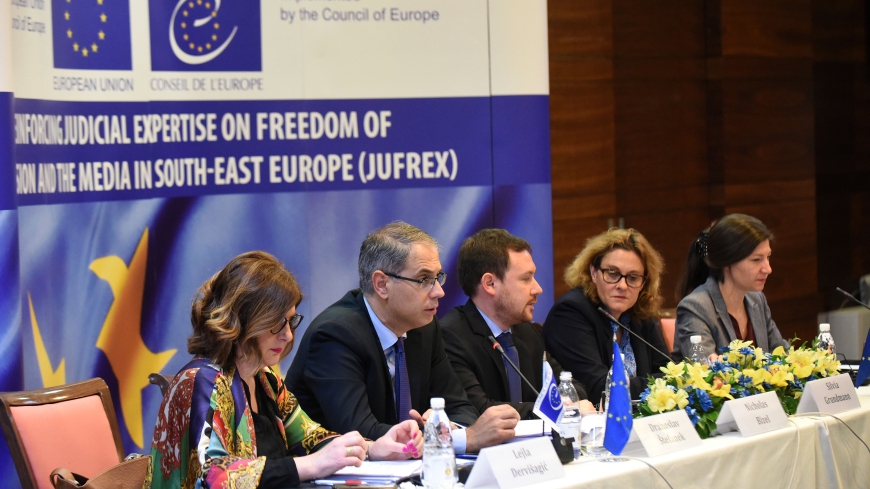 On 5 April 2019, the Final Conference of the Joint Programme of the European Union and the Council of Europe “Reinforcing Judicial Expertise on Freedom of Expression and the Media in South-East Europe (JUFREX)” took place in Sarajevo.

“This year Council of Europe marks 70 anniversary of its work which is based on three pillars: human rights, rule of law and democracy. These are values that we still need to promote and defend”. With these words Drahoslav Stefanek, Council of Europe Head of Office in Sarajevo opened the event.

Silvia Grundmann, Head of Media and Internet Division, Information Society Department, Directorate General Human Rights and Rule of Law, Council of Europe, Strasbourg stressed  that “The role of JUFREX was to enable dialog and enhance expertise of legal professionals and all other actors on freedom of expression and freedom of the media. When working on freedom of expression, it is vital to involve all actors on the scene and JUFREX did that.”

More than 150 representatives of the judiciary, legal professionals, media regulatory authorities, journalists, media NGOS and other media actors from the Western Balkans region, who have been active partners in the implementation of the project, participated to the event.

During the last 3 years, nearly 250 activities were implemented, reaching out to more than 4000 beneficiaries. More than 2000 judges, prosecutors, and lawyers have been trained, while more than 1500 media actors attended JUFREX events.

At the end of the Conference it was concluded that guaranteeing the right to freedom of expression and the safety of journalists are still major challenges in all of Europe today. In many countries, journalists and other media actors are facing threats such as censorship, political and economic pressure, intimidation, job insecurity, abusive use of defamation laws as well as physical attacks. Moreover, new media and internet have brought many benefits but also new challenges and the need to set standards in this field. Both the European Union and the Council of Europe representatives confirmed their commitment to further promotion and support of freedom of expression initiatives in Western Balkans and announced the continuation of JUFREX under the Horizontal Facility II that will be implemented in the whole region as of June 2019.