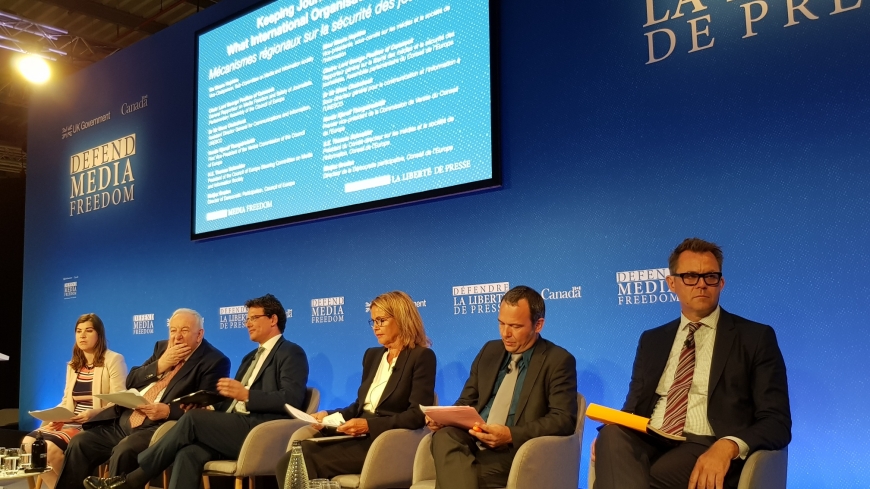 The Chair of the Steering Committee for Media and Information Society (CDMSI), Ambassador Thomas Schneider, attended the Global Conference for Media Freedom in London from 10 to 11 July 2019, together with a delegation from the Council of Europe Secretariat. The Global Conference for Media Freedom was co-hosted by the United Kingdom and Canadian governments and is part of an international campaign launched by the United Kingdom that aims to: shine a light on media freedom everywhere, increasing the cost to those violating it; and improve the safety of journalists and media workers and their ability to work without interference, reducing attacks on journalists and easing state restrictions on freedom of media and expression.

In the context of the workshop on “Keeping journalists safe – what international organizations can do”, showcasing the efforts of the Council of Europe and UNESCO, Ambassador Thomas Schneider presented the Council of Europe’s standards and action to ensure the protection of journalists and of other media actors. Ambassador Schneider, in particular, stressed the importance, comprehensiveness and broad scope of protection provided by CM/Rec(2016)4 on the Protection of Journalism and the Safety of Journalists and Other Media Actors. He further outlined the CoE Implementation Strategy of CM/Rec(2016)4 aimed at ensuring vigorous implementation of this standard by member states, encompassing an Implementation Guide to the Recommendation that will assist member states with the implementation of priority areas such as those of protection and prosecution. Moreover he emphasised that the decline and the urgency of the situation must be matched by an equally urgent engagement by member states through national plans of action on the safety of journalists and of other media actors. Rallying political support for  this last point, he stated, will be one of the aims of the Conference of Ministers responsible for Media and Information Society, that will be held in Nicosia, Cyprus from 27-28 May 2020.

The conference brought together ministers and officials from across the globe, international governmental organizations, civil society, academics, editors, publishers and journalists to debate together and act concertedly.