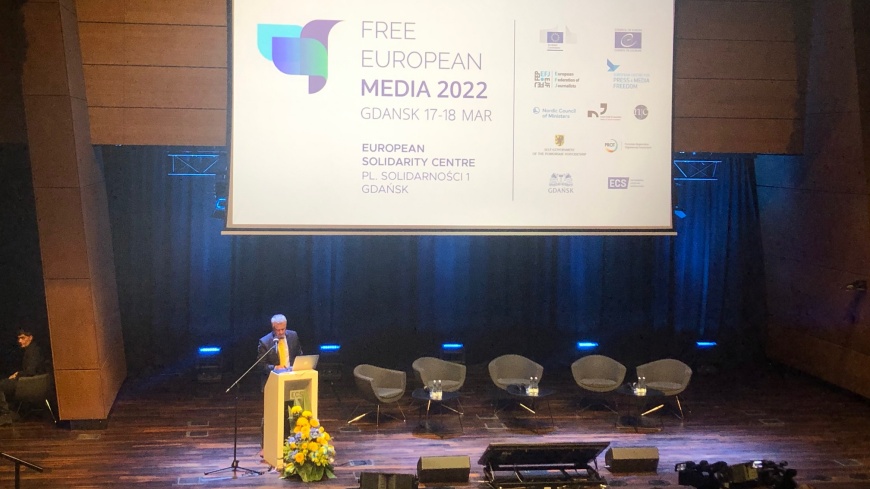 The Free European Media 2022 conference, organised in Gdańsk on 17-18 March 2022, was launched by Věra Jourová, Vice-President of the EU-commission for Values and Transparency, who introduced the European Media Freedom Act. Participoants further examined key topics of the day such as self-regulation as a mean to empower credibility in the media, the issue of trust in journalism and media viability. It also debated the situation in Poland, including the media ownership and political influence. A special session was dedicated to the war in Ukraine. Media freedom and safety of journalists as a prerequisite for democracy where also discussed.

Patrick Penninckx, the Head of the Information Society Department of the Council of Europe addressed the audience with a keynote speech, focusing on the implications of the Russian aggression on Ukraine for media freedom and reviewing the many pre-existing threats to freedom of expression. He evoked the significant increase of alerts on the Platform for the protection of journalists and promotion of journalism in recent years as well as the latest policy guidelines on various aspects of media freedom. Urska Umek, the Head of Media Unit, further presented the Council of Europe's work on media and information literacy, stressing the public's right to information and the intrinsic relation between quality journalism and MIL.

The conference, attended by over a hundred participants from all coins of Europe, was organised by the Free European Media and European Federation of Journalists (EFJ) in cooperation with European Commission (EC), Council of Europe (CoE), the European Centre for Press and Media Freedom (ECPMF), Nordic Council of Ministers (NMR), Nordic Journalist Centre (NJC), Self-Goverment of the Pomorskie Voivodeship, ESC - European Solidarity Centre, City of Gdansk.