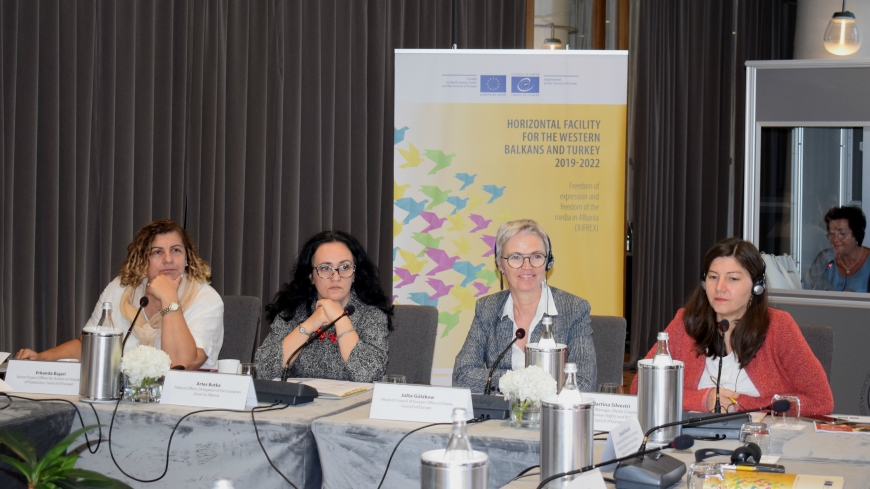 The first Steering Committee meeting of the Action gathered in Tirana key representatives from partner institutions; the School of Magistrates, Bar Association, the General Directorate of State Police, the Albanian Audio-visual Media Authority, Albanian Media Council, academics from Law and Journalism Faculties and media law experts. They had the opportunity to discuss the development of the action, key activities in the next three years, and the intended results to further improve the freedom of expression and the media in the country and align it with European standards.

In her remarks Ms Jutta Gutzkow, Head of Office of Council of Europe in Tirana emphasized that “The successful promotion of human rights, democracy and long-term sustainable development are inseparable from the principle of freedom of expression and the media. I am happy to see your enthusiasm and eagerness to embark onto another challenging but fruitful cooperation with this Action”.

During the meeting beneficiaries and partner institutions emphasized the value that JUFREX represents, and discussed the future milestones in the follow-up action which will continue its work through three main components: 1) support to the judiciary, legal professionals and the police; 2) support to the media regulatory authority; and 3) support to media players and journalist organizations.

During the next 3 years, JUFREX II will be part of the “Horizontal Facility for the Western Balkans and Turkey II”, a larger co-operation initiative co-funded by the European Union and Council of Europe, which aims at assisting beneficiary countries like Albania to comply with the Council of Europe standards and European Union acquis in the framework of the enlargement process