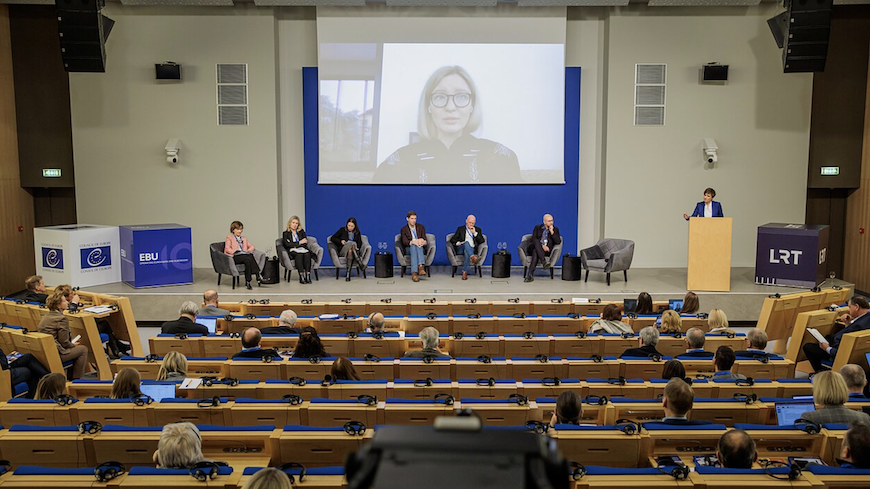 Last week, the Council of Europe and the European Broadcasting Union (EBU) organised a conference on Public Service Media for Democracy in partnership with Lithuanian National Radio and Television (LRT). It was hosted by the Seimas of the Republic of Lithuania in Vilnius under the patronage of Ms Viktorija Čmilytė-Nielsen, Speaker of the Seimas. The conference, held in a hybrid format, brought together journalists, experts, politicians and policymakers to explore solutions to the challenges facing public service media today.

In three panels, speakers discussed the media's vital role as the fourth pillar in democracies. During the first session, entitled Public Service Media and Freedom of Expression in times of crisis, panellists addressed worsened safety and working conditions of journalists and PSM staff during the pandemic and while reporting about the war in Ukraine. In the second panel, Public Service Media between pressure and expectations: standards and practice, speakers discussed the implementation of the Council of Europe standards related to funding, governance and the independence of PSM. It was noted that PSM are under pressure in many member states of the Council of Europe. In the last session, How to ensure a renewed commitment for PSM and a better protection of Freedom of Expression: the way forward, the discussion revolved around the need for independent and innovative public service media in an online media environment. The panellists underlined the importance of citizens’ ability to access independent, engaging and relevant PSM content.

Conference participants confirmed the need for a renewed commitment to media freedom, pluralism and independent and sustainable PSM. Conference conclusions address the worrying trends which threaten Europe’s democracies by putting forward follow up proposals. These include regular dialogue to be set up involving PSM, national authorities and relevant civil society organisations to improve the implementation of standards and pursuit of stronger cooperation between the Council of Europe and the European Union with the aim of implementing shared European standards and improving the conditions for exercising the freedom of the media and PSM.