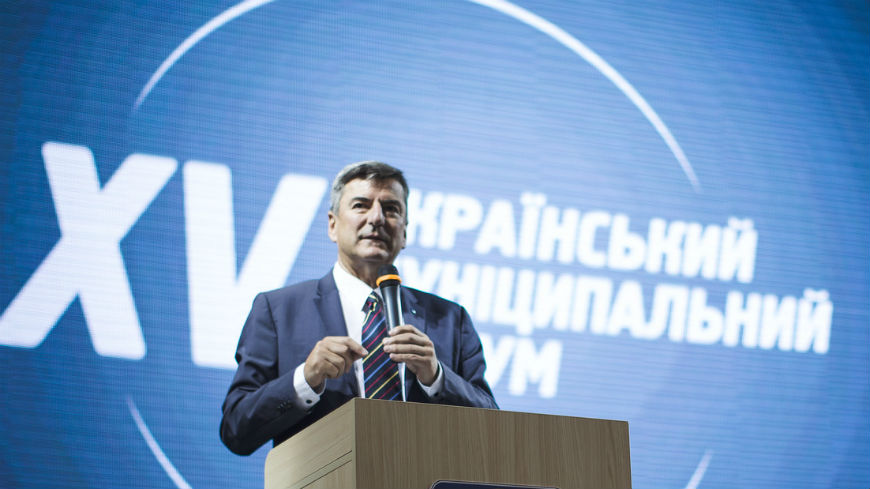 Congress Secretary General Andreas Kiefer opened the “Day of the Congress”, organised jointly with the Association of Ukrainian Cities (AUC) within the XV Ukrainian Municipal Forum in Odesa, Ukraine, on 19 June 2019. He underlined the importance of involving local authorities and the AUC in the reform of local self-government and added that “for any national reform to succeed, public ethics, open government and gender equality should be considered as key elements for its successful implementation and sustainability in local communities.”

“It is the responsibility of local elected representatives to ensure that these principles are applied for the benefit of citizens. This will inevitably lead to improved mutual trust, shared responsibilities, citizen ownership and participatory decision-making, as mayors and councillors are leaders of change in their communities,” said Congress Secretary General.

This message was reinforced by Vitaliy Klitschko, Chairman of the AUC, Mayor of Kyiv who reaffirmed the potential of local authorities and their creativity in particular in the field of open government and open data. He voiced the need to further promote and advance the use of new technologies, innovative approaches and solutions to achieve full transparency in all aspects of local political life.

Based on the exchange of experiences and good practices between some 400 mayors, members of the Congress and experts from several European countries, the participants of the Forum agreed on a Declaration which outlines their commitment to respond to citizens’ needs and growing expectations, and their determination to introduce mechanisms to build trust and engage citizens in local decision-making processes.

The “Day of the Congress” is organised jointly with the Association of Ukrainian Cities within the XV Ukrainian Municipal Forum as part of the project “Strengthening democracy and building trust at local level in Ukraine” implemented by the Congress of Local and Regional Authorities as part of the Council of Europe Action Plan for Ukraine 2018-2021. The project aims to improve the quality of local democracy in Ukraine by strengthening institutional frameworks and by supporting local authorities and their national associations in their efforts to promote ethical decision-making and more citizen-oriented, responsive and transparent local governance.