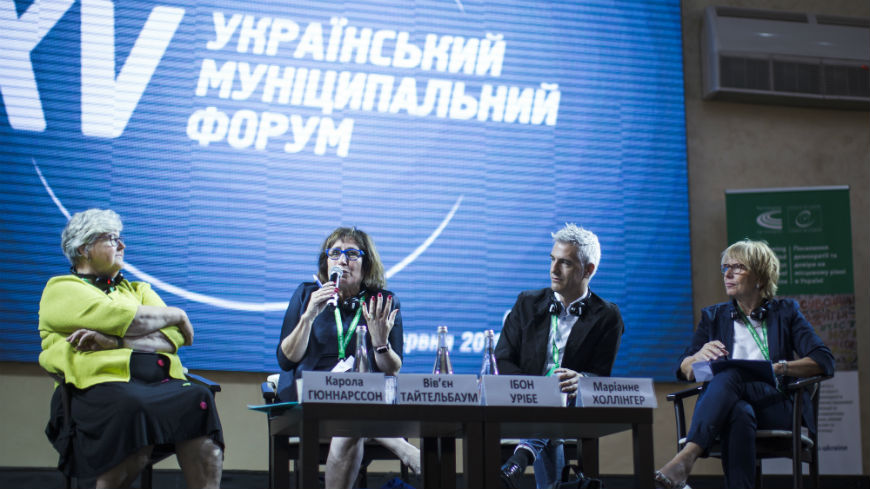 "Gender equality entails equal rights for women and men, as well as the same visibility, empowerment, responsibility and participation, in all spheres of public and private life”, stated Marianne Hollinger (Switzerland, ILDG), member of the Congress, during the session “Gender equality for inclusive local self-government” organised within the XV Ukrainian Municipal Forum on 19 June 2019 in Odesa, Ukraine, co-organised with the Association of Ukrainian Cities.

Recognising that the Forum is an occasion to discuss approaches for advancing gender equality with 400 Ukrainian mayors, she highlighted that “local leaders, with the support of national associations of local authorities, need to integrate a gender perspective in all practices and procedures, and include women in the decision-making processes.”

Stressing that gender equality is a matter of human rights as well as democratic development and economic growth, Ukrainian mayors committed themselves to trigger the debate in their local councils and move towards the adoption of the European Charter for Equality of Women and Men in Local Life. They also agreed in the final Declaration to mainstream gender equality, to ensure equal opportunities for women and men at local level and to reject all forms of discrimination.

This session was organised in partnership with the Council of European Municipalities and Regions (CEMR) / PLATFORMA in the framework of the project “Strengthening democracy and building trust at local level in Ukraine”, implemented by the Congress of Local and Regional Authorities as part of the Council of Europe Action Plan for Ukraine 2018-2021. The project aims to improve the quality of local democracy in Ukraine by strengthening institutional frameworks and by supporting local authorities and their national associations in their efforts to promote ethical decision-making and more citizen-oriented, responsive and transparent local governance.