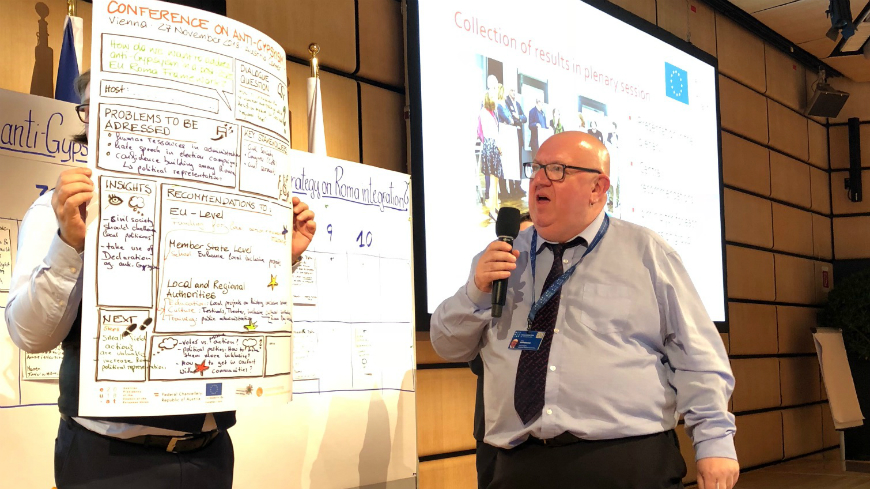 The Congress of Local and Regional Authorities participated in the conference against anti-Gypsyism held on 27 November in Vienna, Austria, as part of the Austrian Presidency of the Council of the European Union. The objective of this conference was to develop recommendations for a possible European framework for national strategies for Roma inclusion after 2020.

Participants exchanged examples of good practices and discussed the establishment of anti-Gypsyism monitoring mechanisms that would be extended to all European countries and more sustainable. They also discussed ways to inform the population about anti-Gypsyism and develop a more positive image of Roma and Travellers.

John WARMISHAM (United Kingdom, SOC), Congress spokesperson on Roma and Traveller issues, led a workshop on "How to strengthen the recognition and political will of decision-makers at local and regional level to fight anti-Gypsyism and to advance Roma inclusion". It was in this context that John WARMISHAM presented the initiative to create national networks of mayors led by the European Alliance of Cities and Regions for Roma Inclusion of the Congress. Such networks can "serve as platforms for the exchange of good practices and dialogue between mayors but also with Roma civil society" in order to allow for a better inclusion of Roma, he explained. The Congress spokesperson also invited the participating of local and regional elected representatives to publicly condemn anti-Gypsyism by signing the Declaration against anti-Gypsyism.

The issues raised during the workshop will be gathered by the Austrian Presidency of the Council of the EU and included in recommendations which will contribute to the European Commission’s reflections on the post-2020 European approach to Roma inclusion.