Chairmanship of the Committee of Ministers: “The European Charter of Local-Self-Government is a major achievement of the Council of Europe” 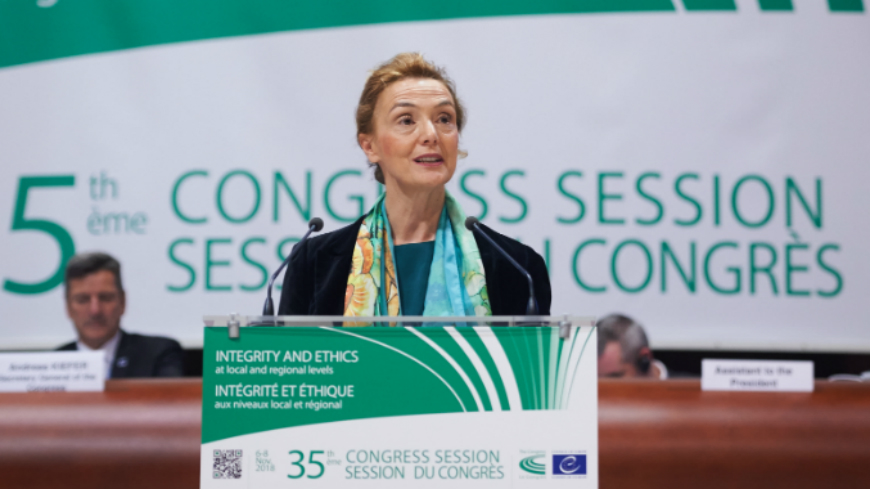 “These are, undoubtedly, difficult times. At the European level, at the national and local level and also at an institutional level. Pan-European challenges are more present than ever,” said Marija Pejčinović BURIĆ, Deputy Prime Minister and Minister for Foreign and European Affairs of Croatia, in an address to Congress members on 7 November 2018. “These difficulties indicate the continued relevance of intergovernmental co-operation and the need to bolster multilateralism. I am certain that we can also count on the full support and co-operation of the Congress,” she added, while stressing the capacity for resilience and innovation of towns, cities and regions.

Ms Pejčinović BURIĆ described recent developments in local democracy in Croatia, underlining the need to regain public confidence. In this connection, she praised the work of the Congress and the European Charter of Local Self-Government as a “major achievement of the organisation” ratified by all Council of Europe member states. “Yes, resources are scarce. Yes, responsibilities are heavy. But action at the grassroots level is nonetheless essential to ensure that the well-being and fundamental rights of citizens are safeguarded,” she said.

The other priorities of the Croatian Chairmanship include the fight against corruption, a challenge which is “closely linked to the responsibility of political representatives towards their electorate” and which helps to “keep the trust of our citizens in democratic institutions and in those who represent them”. That is the aim of the reports adopted by the Congress the same day as part of its road map of activities to prevent corruption and promote public ethics at local and regional level.

The Deputy Prime Minister also referred to the Croatian Chairmanship’s concerns regarding several issues facing Europe, in particular the situation in Georgia and in Ukraine, and in terms of migration and refugees.