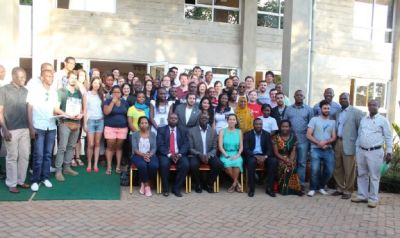 THE AFRICA-EUROPE YOUTH COOPERATION (AEYC) AT A GLANCE: Empowering young people and youth organisations and fostering co-operation and youth policymaking in Europe and Africa.

1. The milestone in the work of the North-South Centre of the Council of Europe (NSC-CoE) in AEYC was the 1st Africa-Europe Youth Summit, organised in December 2007. The final declaration presented in the Summit of Heads of State and Government called for an Africa-Europe Youth programme that would allow the exchange and capacity-building of youth organisations, creating the framework and conditions for their active participation in the development of their societies, in decision/policy-making and in the implementation of the EU-Africa Strategic partnership.

2. In 2008, the NSC-CoE negotiated together with the European Commission the first Joint Management Agreement – JMA (2009-2011) that would be essential for the development of an Africa-Europe dimension of the Youth Co-operation programme of the NSC-CoE. The work developed during the first JMA allowed the development of sustainable partnerships and good practices between both continents and several institutions, including the African Union Commission. Apart from the JMA, the NSC-CoE was also responsible to implement Africa-Europe activities under the framework of the EU-CoE youth partnership until 2012. That year was also a JMA extension year, allowing the continuation of the work developed until the signature of the new JMA in September 2012 for the period 2013-2015.

3. After the 2nd Africa-Europe Youth Summit, in 2011, and in the framework of the Youth Leaders Meeting on Youth Policies in the context of the AEYC, it was defined a 2012-2015 Action Plan which was the basis for the continuation of the JMA agreement beyond 2012 that involved a large group of partners.

4. AEYC was a reference at regional co-operation level that served as example for Euro-Arab/Med co-operation. In fact, this programme was also a contribution for the Southern Mediterranean co-operation for several reasons:

A quick overview of the Joint Management Agreement features for Africa-Europe Youth Co-operation:

The Steering group was composed by the European Youth Forum (YFJ), the Pan-African Youth Union (PYU), the African Diaspora Youth Network in Europe (ADYNE), the Network of International Youth Organisations in Africa (NIYOA) and the Advisory Council (AC) on Youth of the Council of Europe.

A series of training courses were developed aiming at:

It is worth mentioning that NIYOA is one of the successful results of this co-operation. The Network came to life through the joint efforts of former participants of activities facilitated by the NSC in the framework of Global Education. It came to being as a youth-led organisation and it developed its structure based in the peer-learning enrooted in this cooperation. Now it functions as an institutional partner.

At the political level, the Diaspora is considered by the African Union as the 6th region of Africa and the 6th building block of the African Union. These groups are important actors for youth co-operation and represent for the hosting societies an immense richness in terms of human resources, intercultural opportunities and possibilities for relationship with the origin societies. The Youth organisations and youth groups from the African Diaspora living in Europe were fundamental actors for the Youth Co-operation.

The main partner is the African Diaspora Youth Network in Europe. ADYNE has the same role and responsibilities of the partners of the Africa-Europe Training Course.

It is worth mentioning that ADYNE is one of the successful results of this co-operation. The Network came to life through the joint efforts of former participants of activities facilitated by the NSC in the framework of Global Education. Since its creation, the Network continues to grow and became an institutional partner in many different youth platforms and institutional organisations i.e. having had a seat in the Advisory Council on Youth of the Council of Europe.

The activities are always designed and implemented in cooperation with key stakeholders from civil society and international institutions. In line with this multilevel cooperation approach, the North-South Centre contributed to the foundation of diaspora umbrella organisations, such as the African Diaspora Youth Network Europe (ADYNE) and the African Diaspora Youth Forum Europe (ADYFE).

The seed funding aimed at strengthening the role of youth organisations as civil society actors and youth leaders’ ability to organise and take action as well as strengthen young people’s political participation in Euro-African co-operation. Seed Funding for AEYC was a grant allocation intended to promote Africa-Europe youth exchanges, networking and political participation of non-state actors. Funding initiatives provided the possibility for youth leaders, youth workers, experts and trainers to participate in Euro-African Youth activities and youth exchanges projects. The grants were of a maximum € 2000 per project/organisation.

5. African University on Youth and Development.

The African University was developed as a follow-up of the 1st Africa-Europe Youth Summit that took place in 2007 (parallel to the Summit of Heads of State and Government), as a way to promote the contribution of youth for the implementation of the EU-Africa Strategic Partnership. Since the development of 2012-2015 Action Plan and the launching of the AEYP in 2011, the University has been defined as an annual and permanent feature, and its consolidation as a priority of the co-operation.