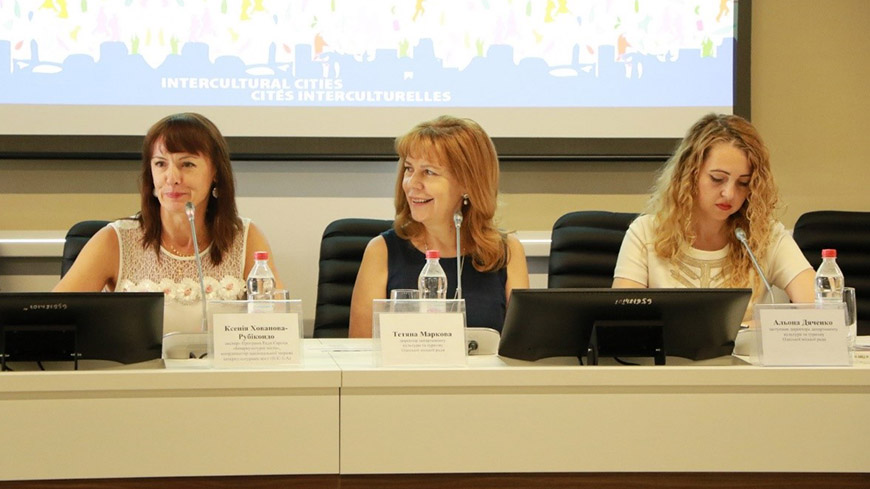 The forth meeting of the local coordinators of the national Intercultural Cities Network of Ukraine (ICC-UA) was held in Odessa, Ukraine, on 18-19 July 2019. The “Intercultural Harbor of Ukraine”, Odessa - that gained this name given its rich cultural history and its location on the Black Sea in Ukraine - welcomed representatives from all six ICC cities-members – Odessa, Melitopol, Sumy, Vinnytsia, Pavlohrad and Lutsk - together with the national coordinator.

The first day of the meeting was dedicated to the review of the ICC-UA activities, success stories and practices, discussion of the issues and challenges met by the cities in their ICC policy implementation locally within the last 12 months. Among other things, the cities’ coordinators presented their experience in developing their ICC City strategies, shared lessons learned, introduced their work on a number of other relevant initiatives, e.g. assistance to migrants, IDPs and people with disabilities.

This part of the meeting was also attended by the heads of the education and science, internal affairs, labor and social service departments of Odessa City Council, who shared their ‘first hand’ information and experience in intercultural policy implementation in Odessa. An open discussion was held at the end of the day aiming to explore existing opportunities, collect new ideas from, develop synergies and identify concrete steps for cooperation between the ICC-UA cities along the ICC policy lines. The meeting participants also visited the new Center for Social Service provision that was launched a few years ago in following the restauration of an old factory building.

Another part of the meeting was dedicated to the experience sharing and review of the lessons learned from the ICC study visits to western European ICC cities, such as Santa Cruz de Tenerife, Geneva, Strasbourg, Turin, in which the representatives from Ukraine took part. The intercultural project “You are part of History”, run by the museum of Montreal and presented during the ICC Thematic event on anti-discrimination raised a lot of interest and, as a result, the ICC-UA coordinators are currently in touch with Montreal to learn more about the methodology of the project and replicate it locally.

The meeting concluded with the first outline of the 2020 ICC-Ukraine Action Plan. The document will be available upon its completion, i.e. following closer consultations on the priority actions with ICC-UA member communities.