The City of Maribyrnong is celebrated for its cultural diversity and Aboriginal heritage, and renowned for welcoming people of all backgrounds and faiths. Maribyrnong has one of the most ethnically diverse populations in Victoria, with 40 per cent of residents born in countries other than Australia. Residents come from more than 135 different countries and speak more than 80 languages.

The population of the City was overwhelmingly Australian-born or from the United Kingdom until the 1940s. World War II brought waves of migrants and refugees from Europe and the Americas and by 1966, almost a third of our population was born overseas mostly from Italy, Greece, Malta, Poland, the former Republic of Yugoslavia and Germany. There was a new wave of migrants and refugees in the 1980s particularly from Indo-China, the Middle East and Central and South America. More recent arrivals include people from the Horn of Africa and the former Republic of Yugoslavia.

The migration patterns are seen in our dynamic business districts. There’s a strong Vietnamese cultural influence in the Little Saigon precinct in Footscray, a strip of African restaurants contributes to ‘Little Africa’ in central Footscray and there’s a notable Indian influence in West Footscray.

On 20 June 2017, Council endorsed the Community Plan 2017- 2021 with a commitment to “Facilitate the development of Maribyrnong as an ‘intercultural city’ that promotes inclusivity and diversity”.

On 24 October 2019, the City of Maribyrnong Mayor, Cr Cuc Lam, signed a statement of intent to become a member of the Intercultural Cities Programme.

The Mayor, along with CEO Stephen Wall, hosted a bilingual story time session in English and Vietnamese, explaining the importance of cultural diversity in Maribyrnong, and Council’s commitment to promoting inclusivity. The storytime booklet is a simple way to explain what it means to be an Intercultural City.

Community members were invited to join the Mayor and CEO in the ceremonial signing to mark their interest in being part of an Intercultural City.

Intercultural Interaction: collective healing and memory of this time

Maribyrnong - Regeneration with a Focus on the Holistic Community 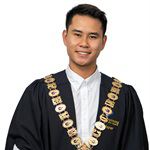