Limerick has become a more diverse society over last the ten years. Census 2011 shows that one in ten of the population are immigrants who have come to work, live or study in the region. Harnessing and managing this diversity is a key opportunity and a key challenge for everyone.

Of this population 90.3% indicated Irish nationality, 1.8% UK nationality, 3.0% Polish, 0.5% Lithuanian, 1.8% other EU, 2.1% rest of world which would include those with American, Australian, African, Asian and Russian backgrounds; 0.1% did not state their nationality and 0.6% are born in Ireland but do not have Irish citizenship.

The Limerick Integration Working Group (IWG) is responsible for coordinating the implementation of the Integration Plan in the years 2013-16. There are 19 statutory, voluntary and community groups in the IWG that are strongly committed to progressing integration measures, celebrating diversity and enhancing social cohesion in Limerick City and County. 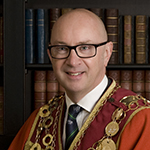