You were redirected to https://www.coe.int/en/web/interculturalcities/genova .

Genova is the capital of the Liguria region. It is the most important harbour in Italy and one of the main harbours in the Mediterranean Sea. 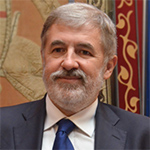