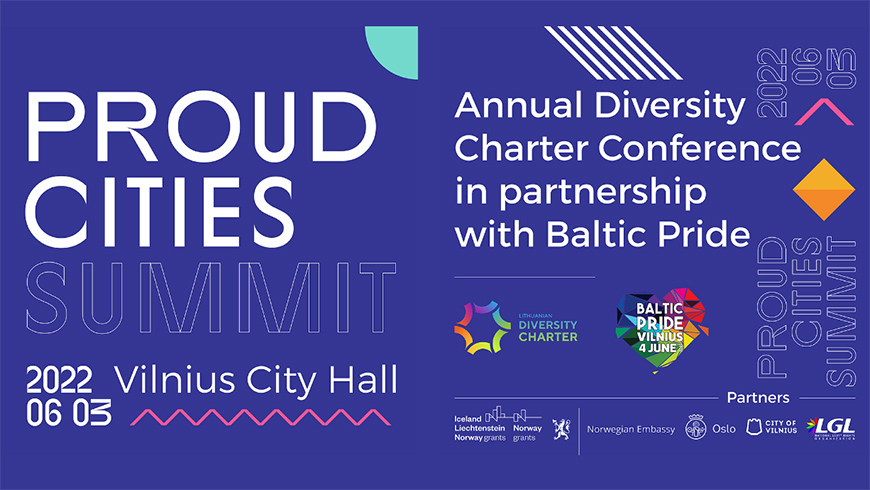 The Proud Cities summit is the Annual Diversity Charter Conference in Lithuania and took place in Vilnius on 3 June 2022. The Summit was organised by the Lithuanian Diversity Charter and LGL in partnership with Baltic Pride. During the event the intercultural policy model was presented.

The conference featured a number of panel debates on topics related to equality, diversity and LGBTI rights. During the panel “Equality, Diversity and Inclusion: Transforming Challenges into Opportunities” the participating Mayors emphasized the importance of recognition of diversity as a tool to ensure everyone feels welcome in their city. The session especially focused on rights of the LGBTI community, as an example of residents facing discrimination and persecution. The role of cities in providing recognition and creating public policies which fight discrimination was raised, together with the need for visibility and political commitment to build more inclusive societies.

In the panel “How to achieve sustainable impact and measurable change in organisations” the role of the private sector was highlighted as crucial to achieving gender balance and in facilitating inclusion through an intersectional approach. Most companies are aware of the challenge of diversity, which has allowed them to set up special units to address the topic. While this is easier for the large organizations, smaller organisations may struggle. A first step which was raised is to analyse the current situation as an accurate diagnosis is important when starting the work. The panel also flagged that private companies also play a vital role in fighting stereotypes and in providing the tools needed to avoid discrimination.

ICC expert Gemma Pinyol presented the intercultural policy model in the panel “The Value and Potential of Migration, Refugee Integration and Diversity” moderated and organised by the UN Refugee Agency UNHCR. During the session, the need for improved instruments to tackle challenges for the increased number of persons forced to flee their home together with needs for improving permanent solutions was raised. Further, the importance of data to fight stereotypes and misconceptions was presented, taking the Swedish case as an example. While the contribution of migrant population in host societies is clear from this research, it seems the common narratives generate fearmongering of migrants and refugees. The intercultural approach was thereafter presented as a process to respond the challenges of living together in diversity. The ICC and its tools were presented to emphasize the role of local authorities in promoting democratic values and social cohesion.