Outcomes of the ICC experts’ visit to Oeiras (Portugal) 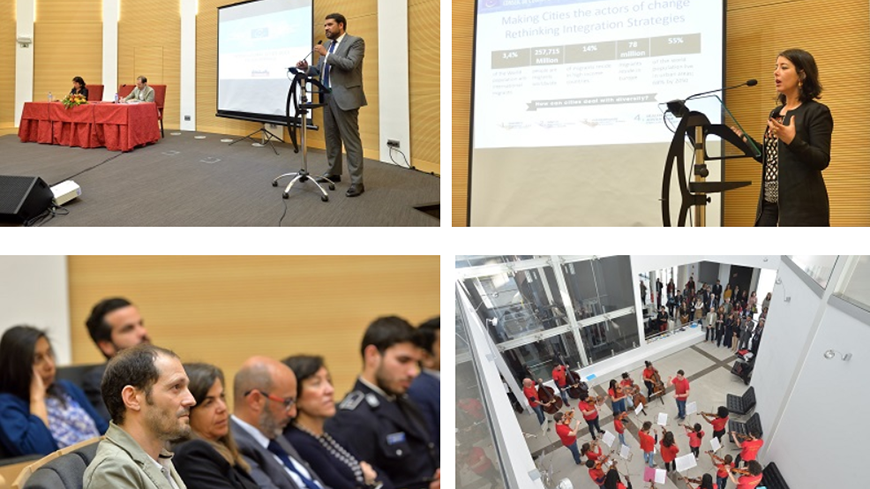 On 20-21 March the ICC carried out an expert visit to Oeiras (Portugal), one of the most recent ICC members.

A representative of the Council of Europe, an independent expert and the coordinator of the Portuguese Network of Intercultural Cities (RPCI) met a large number of city officials, as well as a wide range of local stakeholders in order to make an in-depth "diagnosis" of the city's needs in relation to intercultural policies and governance.

The public session took place at the Temple of Poetry on 21st March, the International Poetry Day and – as of this year – also Oeiras Municipal Day of Interculturalism. It was opened by the Vice Mayor of Oeiras, Mr Francisco Rocha Gonçalves, and by the Head of the Intercultural Cities Unit, Ms Ivana D'Alessandro.

Oeiras interim ICC Index results were presented to the public, noting good achievements in the areas of public services, business and labour market, public spaces, cultural and civil policies, and neighbourhood policies, where the city achieved the maximum score (100%).

While commenting these results, Mr Rocha Gonçalves explained that "interculturality is a priority for the present Executive". He also recalled the action of the present Mayor, Isaltino Morais, who – back in the 80s, "ensured dignified living conditions to more than 10% of the residents of Oeiras who were until then living in slums. More than 5.000 social houses were built since then, many of which have been granted to people with foreign background”.

During the visit, the ICC delegation appreciated the high degree of diversity and mixing in almost all 23 neighborhoods of the city, as well as the long-term commitment of the city’s governing body to the development of its intercultural policies, the success of local service infrastructures in catalysing participation and cooperation, and leadership discourse against discrimination. Also, the delegation could learn about very interesting teaching methods developed in Aquilino Ribeiro School by using intercultural education tools.