The development of interculturality
Melitopol, Ukraine 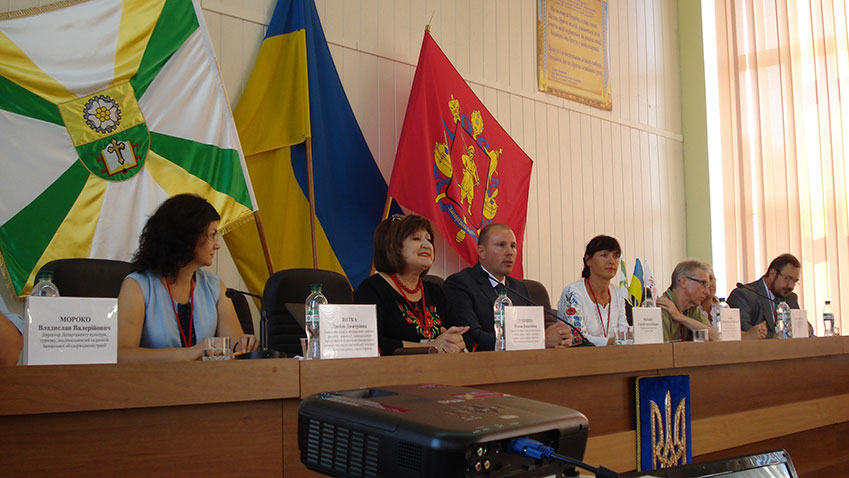 On September 28-29, 2015 the city of Melitopol hosted a second intercultural forum, one year on from a prior event entitled ‘Intercultural Melitopol Supports a United and Integrated Ukraine’. This year’s theme was ‘Revisiting the concept of Intercultural Cities in the contemporary Ukrainian reality’.

And, indeed, it might have been thought that that ‘reality’—no more clearly manifested than by the fortified military checkpoint outside the city, at the junction with the road to the strategic city of Mariupol, little more than 200km away—would make a discussion of interculturalism appear at best irrelevant and at worst indulgent. The conflict focused on the Donbass region continues to simmer and, just two days after the event ended in Melitopol, National Guard officers were killed in clashes with nationalist protesters at the parliament building in Kiev, as elected representatives hotly debated new decentralisation arrangements which, while applying across Ukraine, is hoped to ease secessionist sentiment in easternmost part of the country.

Yet, the second forum was bigger and more ambitious than the first, which had essentially been a round table bringing together for an initial discussion principally local stakeholders, including from the municipality, the university and the various minority associations in a city embracing more than 100 ethnicities. The 2015 event reinforced a natural alignment between the idea of interculturalism, first elaborated in the Council of Europe White Paper on Intercultural Dialogue of 2008, which signalled the Intercultural Cities (ICCs) network as a seedbed of good practice, and the historical experience in Melitopol of a taken-for-granted state of coexistence as the natural state of affairs. The second forum offered self-evidently another model of Ukraine, a Ukraine that went beyond the stereotypical divide into Ukrainian- and Russian-speakers, east and west: as the Council of Europe intercultural policy expert Kseniya Khovanova-Rubicondo told the forum, gathered in the City Hall, interculturalism was about ‘removing barriers between people’.

The focus moved on in 2015 to translating the intercultural commitment of Melitopol into a practical plan and to spreading the message across Ukraine. This time participation was enlarged to more than 150 attendees, and in particular to municipalities right across Ukraine, with a view to establishing a functioning national network of intercultural cities, as has already been done in Spain, Portugal, Italy and Norway. And the city’s new intercultural strategy (plan), which was designed in close consultation with the Council of Europe expert Kseniya Kovanova-Rubicondo had engaged 120 individuals in its preparation, was presented to this audience, hopefully as a model others could emulate.

One lesson from the experience of the ICCs network has been that political leadership is key to the success of the intercultural approach. This is for two reasons: first, its inherently ‘transversal’ nature means it can easily fall between municipal departments, with no one taking responsibility, unless the mayor makes clear that it is the responsibility of all; secondly, interculturalism can seem ethereal and removed from day-to-day concerns unless it is clearly communicated to the public by those in elected authority. Significantly in that light, the mayor of Melitopol, Sergiy Minko, welcomed the key figures involved to his office before the forum, opened proceedings at a session in City Hall expressing his support to Melitopol’s participation in the ICC Programme and rejoined participants informally on day two. The vice-mayor for culture and the representatives of the strategic development department attended the event throughout.

Mr Minko linked the city’s integration strategy to ‘innovation’ pointing out that the Melitopol plan was designed with entrepreneurial spirit of its citizens, regardless the fact where they work: for public or private sector, for cultural, educational or government institutions. He emphasized that it is essential that interculturalism assists a city like Melitopol, with its strong engineering tradition, to find a route to economic modernisation, including by helping to attract and retaining the qualified personnel needed to compete in a globalised economy. In the context of Ukraine’s severe issues of not just of political turmoil but also post-Soviet deindustrialisation and chronic corruption this, of course, remains a challenge.

A second lesson which the ICCs network has thrown up was the significance of the university vis-à-vis intercultural strategies, on which theme there was a valuable ICC network seminar in Oslo in May. Interculturalism is not a bed of roses: managing diversity fruitfully presents challenges, to which academic problem-solving expertise can be valuably applied. As with the previous forum, this event took place partly in the university in Melitopol, and the participation of the rector and other academics reflected a clear commitment on the part of this 90-year-old institution not only to the city but also, specifically, to its intercultural trajectory.

The “Melitopol Intercultural Integration Plan 2015-2020’ is set in the context not only of the ICCs network but also of the Development Strategy of Melitopol, which has the same conclusion point. This is valuable in allowing everything the municipality does to be viewed through the ‘intercultural lens’ and in making the connection to the wider public arena. It is similar to the approach which is being taken by many other cities-members of the ICC network, e.g. the Irish city of Limerick or the Serbian municipality of Subotica, where the intercultural strategy is seen as nested with the overall sustainable-development strategy for the city.

The ICCs network has always sought to exploit the ‘diversity advantage’ and the Melitopol integration plan concretises the mayor’s ‘innovation’ theme, describing its main objectives in talent-tapping terms: ‘creating conditions and new opportunities for dynamic, inclusive, truly intercultural society with the participation of all residents regardless of their ethnic origin, religion, age, sex or education’. The plan is organised around five strategic themes:

Each of these themes is associated with a number of specific organisational purposes and consequent tasks. Each of these tasks has an identified responsible actor(s), a timescale and envisaged results.

The plan is to be implemented by a working group approved and chaired by the mayor. It includes a wide range of local and external stakeholders, although the reference to business representation is not matched by that of trade unions or third-sector organisations. It will be essential, as elsewhere, for the plan to enjoy the support of non-governmental organisations as well as their engagement in its delivery on the ground.

To an extent, the Melitopol forum was symbolic for ‘revisiting the concept of Intercultural Cities in the contemporary Ukrainian reality’. This is not only for the reason that Melitopol is the only Ukrainian member of the European ICC network since 2008 but also because its key actors and stakeholders have been working at the regional and national level (hence, the representatives of the Ministries of Education and Foreign Affairs and of the regional administration attending the forum) raising awareness about the intercultural approach.

In this context – and following a very informative presentation of the ICC network benefits and its best practices by the Council of Europe expert Robin Wilson and an interactive Q/A session with the two experts from the Council of Europe on the key concepts of the ICC - the forum agreed that a national network of Ukrainian intercultural cities would be beneficial and more than ten cities-participants expressed their interest before the event was over. A new application form was presented and shared with the cities, and detailed instructions and submission deadlines provided. This is a core group of critical mass with which to start and over time it is envisaged that more cities will join officially, as the network proves itself in practice. The meeting agreed that the principles of such a network would be set down in a memo of understanding agreed by its founding participants. There was a valuable discussion in this light of the benefits of partnership between the cities and relevant local NGOs.

The ICCs Programme has produced a ‘step-by-step guide’ to intercultural cities. A more specific guidebook for ICCs in Ukraine is envisaged to assist the members of the new national network. The content of this guide were discussed with the forum participating cities.

In January 2015, The Committee of Ministers of the Council of Europe provided a recommendation endorsing the work of the ICCs network. It not only urged member states to support national intercultural-city networks but also to take account of this experience in developing national integration plans. Apart from the benefits of a Ukrainian network in sharing good practices, a longer-term goal to influence national policy in this regard was discussed at the forum. A national intercultural policy could be a very important assertion that a diverse but unified Ukraine is a realistic political goal.