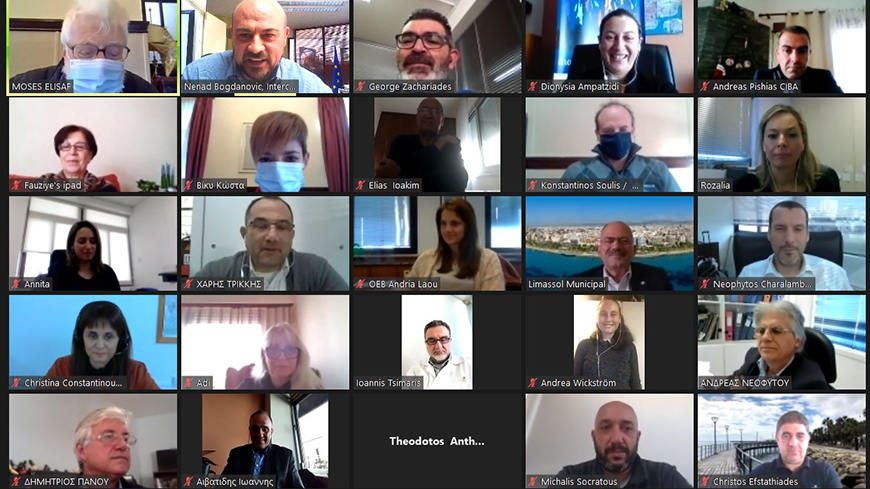 Culminating by a public video-conference held on 16 December, the Mayors of Limassol and Ioannina, accompanied by high-ranking municipal officials, representatives of collaborating organisations and media, announced the outcomes of the joint project “Intercultural Twinning: Cultural Diversity for Inclusive Growth”, funded by ICC programme of the Council of Europe.

During the project, the two Municipalities - twinned since 1984 and both members of ICC programme, have conducted a series of information and structured dialogue actions, involving wide range of stakeholders, in order to promote the cultural diversity as an asset and and advantage for inclusive growth in post-pandemic era.

During the video conference, the two Mayors, Dr Moses Elisaf of Ioannina and Mr. Nicos Nicolaides of Limassol, as well as a representative of the ICC team, welcomed the initiative, congratulated the involved organisations for their results, and expressed the wish that Intercultural Twinning will become a basis for further inclusive integration actions. In continuation, the draft text of Joint Declaration under the title “Cultural Diversity as an advantage for Economic Development and Social Cohesion” was publically read, act by which the two cities proceeded with a symbolic “intercultural” twinning. The Joint Declaration calls on various instances of public, private, civic and academic sectors of Cyprus, Greece and internationally, to develop coordinated actions in order to promote the cultural diversity in working space, towards sustainable and inclusive growth.

The videoconference was jointly coordinated by Mrs Dionysia Abatzidi, Special Advisor to the Mayor of Ioannina for Migration and Social Policies and Mr Nenad Bogdanovic, Intercultural Counsellor of Limassol Municipality, both members of GT-ADI-INT working group of the Council of Europe.