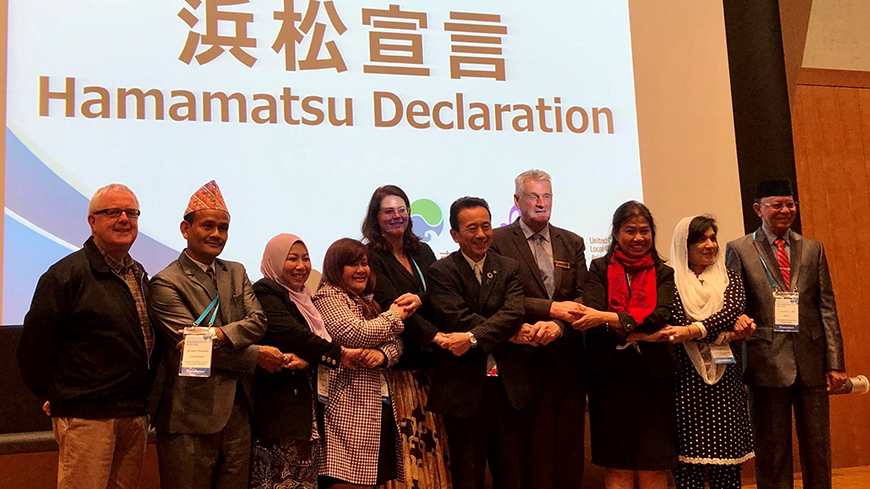 On 23-25 October the city of Hamamatsu (Japan), in cooperation with the Intercultural Cities programme, organised an International Summit on Intercity Collaboration.

The ICC representation at the event comprised Mr Phil Wood, independent experts, along with mayors and officials from Botkyrka (Sweden) and Ballarat (Australia). Their participation was expressed in two plenary sessions (both moderated by Prof Keizo Yamawaki) entitled ‘Community building that makes use of diversity advantage’ and ‘Interculturalism’ (which also involved Mayor Yasutomo Suzuki as commentator).

These sessions were part of a more extensive programme organised in partnership with UCLG (Asia Pacific) and the Japan Foundation, which included guest mayors from many countries including Pakistan, Nepal, Malaysia, Indonesia and the Philippines as well as many Japanese cities and NGOs.

The two sessions in which ICC participated conveyed a clear message, particularly through practical examples from Botkyrka, Ballarat, Hamamatsu (and also from Kirklees, through Mr Wood’s participation). Ballarat elaborated its approach with reference to several examples. Firstly the Intercultural Ambassadors Programme, which provides opportunities for people from diverse backgrounds to influence public life. Secondly the Intercultural Employment Pathways Programme which improves career outcomes for migrants and refugees. Thirdly the Reconciliation Action Plan, acknowledging the place of Aboriginal peoples in the community, and finally a raft of events including the Intercultural Gala Dinner and the Language Café.

Botkyrka’s presentations spoke of the municipality’s journey from being a place considered disadvantaged by its diversity, to one in which it has become a strength. Mayor Ostlin gave a very personal account of how her own journey of coming to terms with multiple identities mirrored that of the district as a whole. Botkyrka also presented its method of turning words into action through its six keys for intercultural integration.

In his presentation about Kirklees, Mr Wood addressed the problem of rising segregation, common to many parts of the UK and described two projects which are effectively counteracting it. First The Linking Network which pairs mono-ethnic schools in order for pupils (and their parents) to build relationships with people of another background. It is particularly good at providing teachers with advice and resources for tackling difficult conversations about identity. Secondly the Great Get Together, an annual event to encourage strangers and neighbours to meet, which has grown directly out of the shock and sympathy in the wake of the assassination of local MP Jo Cox. Whilst starting locally, it has now spread nationwide and over six thousand individual events were held in 2019.

Mayor Suzuki devoted his presentation to the Hamamatsu’s priorities of education and the labour market. As previous ICC visits to Japan have testified, Japan has sought over many years to limit foreign migration in numbers and duration through a narrow guest worker policy. In many cities the citizenship rights of foreigners have been severely constrained, whilst protection from discrimination has been narrowly enforced. In contrast Hamamatsu has sought to encourage foreigners to feel more welcome and engaged in society. Hamamatsu has also sought to extend its network of international contact through offering employment opportunities for foreign students, including several places in the municipality itself.

A recent change in national policy has seen the introduction of a new Immigration Law which will significantly increase the number of low skilled and manual workers allowed to enter from other parts of east Asia and beyond. The government has created two new visa statuses. The first is for foreign workers having a certain level of skill, who will be allowed to stay in Japan for up to five years but will not be allowed to bring their family members. The second is for workers with a higher skill level who would be allowed to bring their spouses and children. If certain conditions are met, they could be permitted to live in Japan indefinitely.

Hamamatsu hopes to be well placed to ensure its major employers and small and medium enterprises benefit from this, and that the new arrivals are well integrated into the city. A major component of this will be ensuring foreigners are able to communicate in Japanese. The ICC expert visit in 2017 confirmed that Hamamatsu is already well ahead of much of the rest of Japan in its provision of language tuition and support. At the Summit, Prof Yamawaki initiated a discussion around his campaign to gain widespread adoption of a simplified form of Japanese language into public life, to facilitate integration.