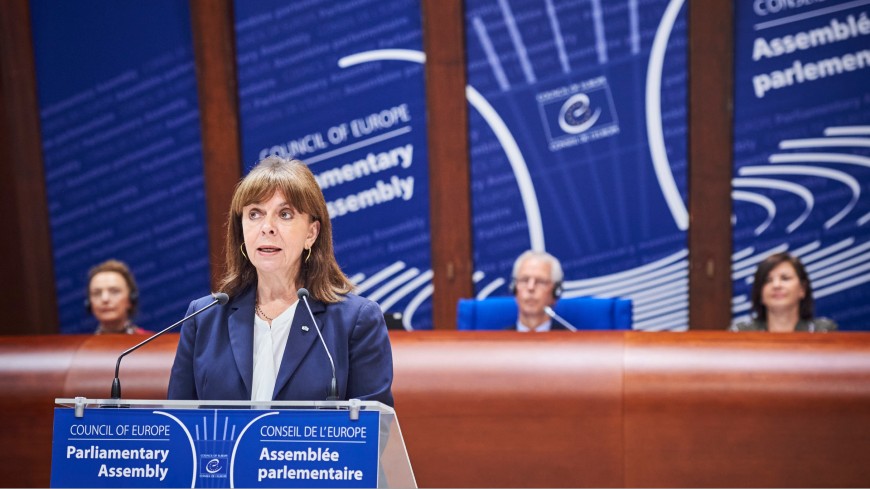 In an address to the Parliamentary Assembly today, Greek President Katerina Sakellaropoulou called for a stronger Council of Europe and greater multilateralism to tackle the many challenges facing Europe today – ranging from the war in Ukraine to climate change and economic and social upheaval.

Speaking to parliamentarians during PACE’s summer session, the first female President of the Hellenic Republic recalled the roots of ancient Greek democracy, and praised the “democratic symbolism” of the Parliamentary Assembly as an agora, or marketplace of ideas, which remained at the heart of its political identity.

Russia’s aggression against Ukraine represented “a direct and frontal challenge to liberal democracy and European values,” she underlined, adding: “Russia's incursion is not just about the heroic Ukrainian people, who give us the highest example of self-denial and patriotism, but it is a matter for all of us.” She praised the “strong message of unity” in the decision to expel Russia from the Council of Europe. Backing the Assembly’s proposal to establish an ad hoc international tribunal to investigate the crime of aggression against Ukraine, she pointed out Greece's interest in the Mariupol region, where a Greek community of more than 100,000 people has “lived for centuries”.

Ms Sakellaropoulou also gave her support to the holding of a fourth Summit of Heads of State and Government on the Council of Europe’s future, specifying that its success would be conditional on “sound preparation and clear objectives”.

Addressing the universal challenge of climate change, she said that the war in Ukraine must not become a “pretext” to slow down the green transition. “Policies of pure and sustainable development guarantee not only the sustainability of our planet, but also the immaterial dimension of our daily lives, the form of life of our civilisation,” she said.

She warned that fundamental rights were under “intense pressure” – from LGBTQ+ rights to combating antisemitism – and evoked the “harsh reality for women” of domestic violence. The Council of Europe’s Istanbul Convention was a “compass” for action to prevent such violence, she pointed out.