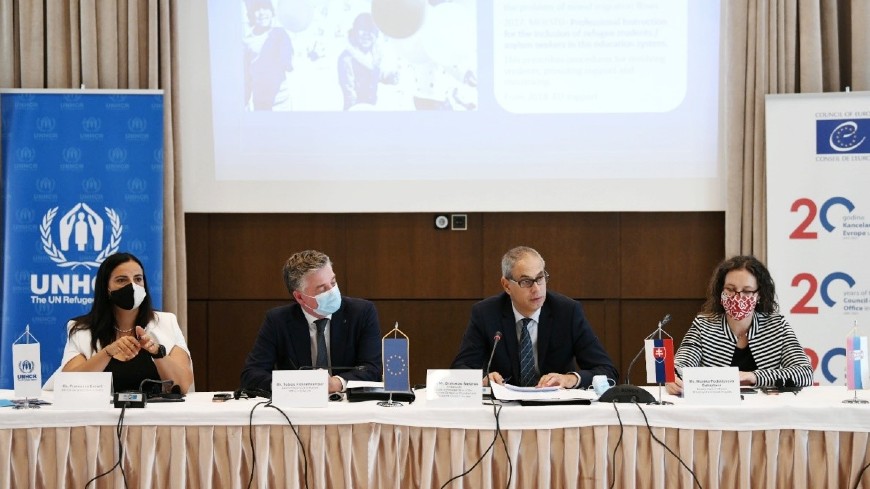 The Special Representative on Migration and Refugees, Drahoslav Štefánek, was invited to Belgrade for two migration-related meetings: an briefing session on the European Qualifications Passport for Refugees (EQPR) and to the “Regional Conference on Alternatives to Immigration Detention in the Western Balkans”.

On 14 September 2021, hosted by the Embassy of Slovakia in Belgrade, the Special Representative participated in a briefing on the implementation of the European Qualifications Passport for Refugees project in Serbia, co-organised by the Council of Europe and the UNHCR.

Ambassador Štefánek presented the European Qualifications Passport for Refugees (EQPR) project and highlighted that it is a tool to promote the integration of refugees which is included in the new Council of Europe Action Plan on Protecting Vulnerable Persons in the Context of Migration and Asylum in Europe (2021-20125). “For instance, the EQPR helped find qualified refugees in the health sector during the pandemic, and only last week a training module was held for credentials evaluators assessing the qualifications of Afghan nationals”, he said.

The EQPR is supported by the UNHCR through identifying potential candidates for the assessments or raising awareness on the benefits of the EQPR to education qualifications users.

“We are very pleased that Council of Europe, Ministry of Education, Agency for Qualifications and National Employment Service and UNHCR will bring new opportunities to the refugee population in Serbia through the European Qualifications Passport for Refugees. This is an important document for refugee students, if they decide to continue studies here or work with their previously acquired qualifications which are now going to be recognised”, Francesca Bonelli, said the UNHCR Representative in Serbia.

“The European Qualifications Passport for Refugees is a unique instrument providing refugees with an assessment of qualifications that cannot be fully documented. The passport methodology is based on the Lisbon Recognition Convention concerning Higher Education in Europe of the Council of Europe which Serbia joined 2004. We are looking forward to refugees being able to fully enjoy their rights and freedoms, including to continue their studies or find a job related to their education in Serbia or elsewhere in Europe“, said Tobias Flessenkemper, Head of the Council of Europe Office in Belgrade in his opening remarks.

Snežana Vuković, Head of Sector for Human and Minority Rights in Education at the Ministry of Education, Science and Technological Development of the Republic of Serbia gave an overview of the work in Serbia in this field. The event included testimonies by refugees and holders of the EQPR, Ms Kathia Katihabwa Irakoze and Mr Sebtimio Sever Khalifa.

Serbia became the 12th country to join the project in June 2021, together with Armenia, Bosnia and Herzegovina, Canada, France, Germany, Greece, Italy, the Netherlands, Norway, Romania, and the United Kingdom.

On 15 September 2021, in his opening remarks at the “Regional Conference on Alternatives to Immigration Detention in the Western Balkans”, Ambassador Štefánek emphasized that the detention of migrants and refugees should be a measure of last resort and that the use of a variety of effective alternatives to detention has manifold benefits. He highlighted the Council of Europe´s work on supporting states in strengthening their capacity to identify ways to make alternatives to the administrative detention of migrants more effective, ensuring compliance with immigration procedures while upholding human rights.

"Determining migration policies and adopting a framework for migration management, which ensures the integrity and credibility of migration and the asylum system, remains within the competence of the state and its institutions. However, states must ensure that implementing laws, measures and practices protect migrants, protect their rights and are sufficiently tailored to the specific vulnerabilities of migrants" said Laura Lungaroti, Western Balkans Subregional Coordinator and Head of the IOM Mission in Bosnia and Herzegovina.

The meeting was held within the project "Regional support for migration management with the protection of migrants' rights in the Western Balkans and Turkey", funded by the European Union and jointly implemented by IOM, Frontex (European Border and Coast Guard Agency), UNHCR and EASO.