To get acquainted with cities’ good practices related to the management of the Covid-19 pandemic, please visit Intercultural Cities: COVID-19 Special page. 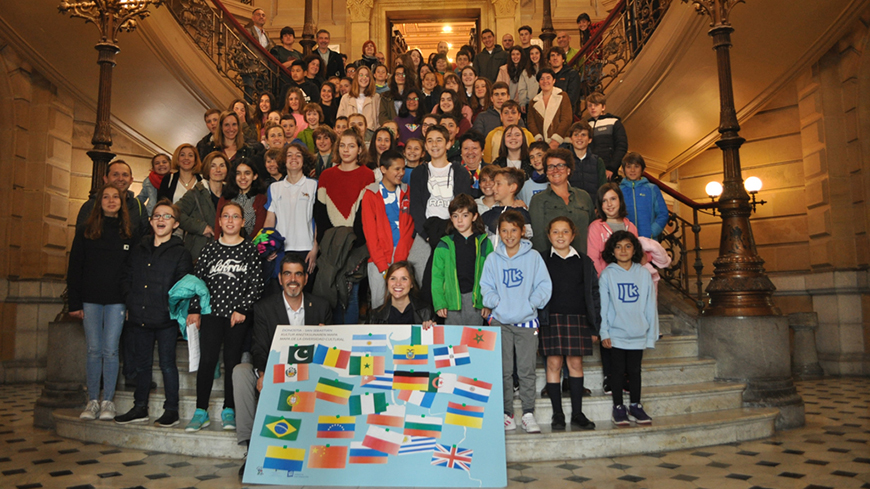 During the 2017-2018 school year, around 15,000 students from 28 schools in San Sebastian participated in the Agenda 21 School programme, which this year was dedicated to the study of Cultural Diversity.

Through different activities, students have been able to discover what cultural diversity is, get to know the different cultures present in the municipality, and analysed the situation of their schools; they have visited and interviewed various agents, they have reflected on the stereotypes and prejudices existing in society, and how to deal with them. As a result, they have become aware of the intercultural reality of the municipality.

In order to deepen the meaning of their work, the children have approached the City Council to ask that necessary measures be taken to improve the lives of the people who come to live in the city. The ceremony held on May 16 in the Plenary Hall of the Town Hall welcomed around 100 young people between 10 and 14 years to have such an exchange of views with local decision makers.

On that occasion, the representative of each of the participating schools presented the work carried out, the commitments made and the school’s requests to promote intercultural coexistence. The act was also enlivened with verses and songs composed by some of these students. Likewise, greetings could be heard in different languages flags from different countries were displayed.

Both the Mayor and the councilors of Environment and Cultural Diversity answered all questions raised. Among them, the main ones were touching upon: the promotion, respect and defense of human rights; the improvement of the reception plan; the organisation of actions in neighborhoods and schools to learn about different cultures; a plan for cultural diversity and the fight against racism; the inclusion of refugees or climate migrants in the municipal strategy against climate change; and strengthening the relationship between the City Council and cultural heritage associations.

This educational Agenda 21 School programme, recognized by the UNESCO and operating for the sustainability of the planet, offers the opportunity for compulsory education students to participate in the action plans of the municipalities, through proposals and applications that they make to the municipal government. On this occasion, the students have also assumed their own commitments to respect cultures and people of other origins, to know and welcome them, and to promote peaceful coexistence. And finally, they have analysed the 17 sustainable development goals included in the 2030 Agenda and proposed that UNESCO includes an 18th objective in favor of cultural diversity.

The event at the City Council ended with a clear message from the Mayor in which he recognised cultural diversity as a wealth for society and defended the equality of all people.