Can I hug my colleague at work without asking, or is this sexual harassment?
Is it OK to comment on a woman’s body? 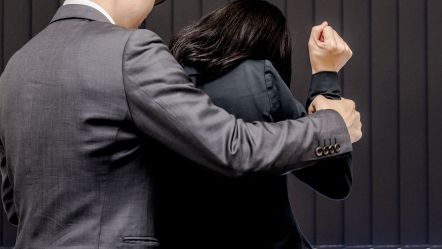 When, in fact, does harassment start? It is helpful to note, from the start, that any form of harassment is usually humiliating and degrading and threatens the physical and mental integrity of a person. The Istanbul Convention of the Council of Europe defines sexual harassment as:

any form of unwanted verbal, non-verbal or physical conduct of a sexual nature with the purpose or effect of violating the dignity of a person, in particular when creating an intimidating, hostile, degrading, humiliating or offensive environment.15

Harassment is said to occur “where an unwanted conduct related to the sex of a person occurs with the purpose or effect of violating the dignity of a person, and of creating an intimidating, hostile, degrading, humiliating or offensive environment”.

Sexual harassment is “where any form of unwanted verbal, nonverbal or physical conduct of a sexual nature occurs, with the purpose or effect of violating the dignity of a person, in particular when creating an intimidating, hostile, degrading, humiliating or offensive environment”.

This EU Directive states that harassment is both a form of discrimination and that it is illegal.

Examples of non-verbal harassment include: looking a person up and down (‘elevator eyes’), following or stalking someone, using sexually suggestive visuals, making sexual gestures with the hands or through body movements, using facial expressions such as winking, throwing kisses, or licking lips.

Instances of physical harassment include: giving someone a massage around the neck or shoulders, touching another person’s clothing, hair, or body, hugging, kissing, patting, touching or rubbing oneself sexually against another person.

The key concept in understanding harassment is that any overtures are unwelcome. A person may welcome and accept a sexist remark or a comment about their body, but this is likely to depend on the particular situation and circumstances. However, it is important to remember that even if someone accepts – or welcomes – the behaviour, it may still be degrading and humiliating. In addition, such acceptance may not be fully voluntary: it may be a result of often invisible pressure from the outside world.

15 Council of Europe Convention on preventing and combating violence against women and domestic violence, Article 40

16 Directive 2002/73/EC of the European Parliament and of the Council of 23 September 2002 amending Council Directive 76/207/EEC on the implementation of the principle of equal treatment for men and women as regards access to employment, vocational training and promotion, and working conditions