Many cultures have sayings or expressions to the effect that words are harmless, and there is a long tradition that teaches us to ignore verbal attacks. However, when these attacks become regular and systematic and purposefully target someone’s sensitive spots7, the object of the attacks is right to consider themselves victims of verbal abuse. Verbal violence can include issues that are specific to a person, such as putdowns (in private or in front of others), ridiculing, the use of swear-words that are especially uncomfortable for the other, saying bad things about the other’s loved ones, threatening with other forms of violence, either against the victim or against somebody dear to them. At other times, the verbal abuse may be relevant to the background of the victim, such as their religion, culture, language, (perceived) sexual orientation or traditions. Depending on the most emotionally sensitive areas of the victim, abusers often consciously target these issues in a way that is painful, humiliating and threatening to the victim.

Most of the verbal violence that women experience because of being women is sexualised, and counts as sexual violence. Verbal gender-based violence in the public sphere is also largely related to gender roles: it may include comments and jokes about women or may present women as sex objects (e.g. jokes about sexual availability, prostitution, rape). A great deal of bullying is related to the (perceived) sexuality of young people (especially boys). The regular negative use of words such as ‘queer’ or ‘fag’ is often traumatising for those perceived as gays and lesbians. This is very likely one of the reasons why many gays and lesbians only ‘come out’ after secondary school.

Verbal violence may be classified as hate speech. It can take many forms: words, videos, memes, or pictures that are posted on social networks, or it may carry a violent message threatening a person or a group of people because of certain characteristics. The European Commission on Racism and Intolerance defines hate speech as:

(…) advocacy, promotion or incitement, in any form, of the denigration, hatred or vilification of a person or group of persons, as well as any harassment, insult, negative stereotyping, stigmatisation or threat in respect of such a person or group of persons and the justification of all the preceding types of expression, on the ground of 'race'8, colour, descent, national or ethnic origin, age, disability, language, religion or belief, sex, gender, gender identity, sexual orientation and other personal characteristics or status9. 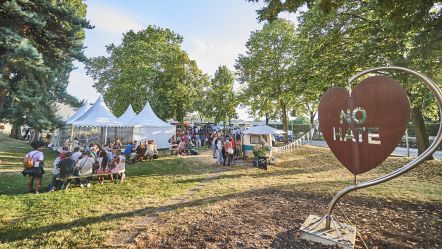 Gender-based hate speech mainly targets women (in this case, it is often called sexist hate speech)10 and LGBT+ people, on the basis of sex, gender, sexual orientation or gender identity both in the private and public spheres. This includes the Internet, which is considered a public sphere. However, people may also be affected by this kind of gender-based violence in private e-mails or messages sent using online messaging software.

Gender-based hate speech can take many different forms – jokes, spreading rumours, threats, slander, incitement of violence or hate. It aims at humiliating, dehumanising and making a person or group of people scared. As with any type of violence, gender-based hate speech is usually very destructive for the person targeted: people who experience hate speech often feel helpless, and do not know what to do. They feel uneasy, frightened, and they lose self-confidence and sometimes even attempt suicide.

Hate speech can sometimes lead to hate crimes - crimes that are motivated by prejudices targeting a person whose identity is different from the perpetrator’s. Hate crimes can take various forms: physical violence, destroying property, arson or killing. The victims are deliberately chosen because of certain characteristics that they are perceived to possess.

8 Since all human beings belong to the same species, ECRI rejects theories based on the existence of different races. However, in this Recommendation ECRI uses this term 'race' in order to ensure that those persons who are generally and erroneously perceived as belonging to another race are not excluded from the protection provided for by the Recommendation.