Developing an initiative or a strategy 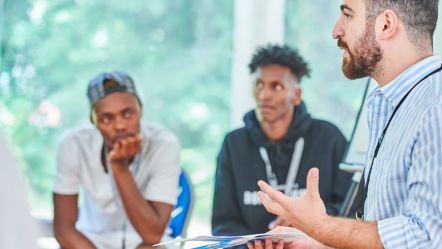 Planning should be carried out together with the members of your group/ organisation, to ensure that you focus on what your group wants, what they are able to do, and the best ways of achieving this.

This section offers a simple way of structuring a plan and organising work with a group in order to help them achieve their aims effectively.

You can use the reflection questions to reflect critically on the work of your group or organisation on gender and gender-based violence. However, before beginning, you may also want to review the knowledge and skills that exist in your group, as well as on participants’ interests.

A SWOT analysis is an effective way of doing this. Such an analysis also looks at the circumstances outside the group which might influence what you may be able to do.

The acronym SWOT stands for:

How does a group choose which issue to work on? In most cases, people in the group will have issues that they think are important and want to work on. The main difficulty may be in arriving at a common agreement about which issue to choose, and about the best way to approach it.

You will need to keep all members of the group behind the final decision, so do not rush a discussion about issues: give them plenty of time to air preferences and talk through the advantages of choosing one rather than another. Remind them that there may be opportunities to address other concerns later on. Remind them also that the most important thing is that the group stays together to work through an action - so if one person is strongly against a particular choice, it may not be worth pursuing. Try to reach consensus in the group, rather than going for a majority decision.

A problem tree provides a useful tool for analysing the issue you will be working on. This is a method of breaking down an issue, looking at causes and consequences, and placing it in the context of other problems in society. A problem tree can be  useful both in providing a better understanding of an issue for the group, and in helping to approach a solution in a more strategic way.

This is the procedure a group would use to draw up a problem tree for their own issue:

When you have finished, take a look at your tree:

It is important to know what you would like to happen as a result of your action! What would count as a success? Get the group to think about what they are trying to achieve, and how they will measure whether or not they have been successful. They may find it useful to go back to the problem tree and use this to identify concrete solutions. In general, attacking the roots will lead to solutions further up the tree.

Be mindful that changes in policy are often difficult to bring about, but not impossible. The group needs to be realistic about what it can hope for: remind them that even a “small” result can be an invaluable contribution to resolving a larger problem. Effective campaigns are nearly always built up from exactly such “small” actions, and anything achieved by your group can either be built on later on, or picked up by other activists concerned about the problem.

It may be helpful for the group to brainstorm some general reasons for taking action. This may help them to pick out those which are most relevant to their own issue, and to identify a number of specific objectives that they feel it is realistic to achieve.

Your group has now decided on an issue and has an idea of what they might be trying to do. It is time to decide on the methods they will use to achieve their aim.

Which problem do you want to address?

What is your target audience?

Unless you are hoping to resolve the problem immediately, the target audience for your action may not be the person or people who can make the final change that you are looking for. Your action is quite likely to be no more than a step towards making the change; for example, you may be trying to alert the public to an issue, in order to put pressure on the government. Or you may be trying to set up a local group so that the group can work on the issue you are concerned about. Your target audience may consist of more than one group of people.

Which changes do you hope to see?

This question again relates to your action, but not necessarily to the final change you might be aiming for. You may be able to generate interest in the problem, which will encourage others to take action in different ways, and that, in turn, may be enough to bring about a change in company policy or in government regulations applying to those companies. In this box you need to think about what the action is meant to achieve, and how you will know whether or not you have succeeded.

How is change expected to come about?

This question is not yet about the mechanism that the group decides to use, it is about how the action is supposed to work, and will often relate to the psychology of changing people’s minds or making people realise that they need to do something differently. It is a very important question that is often forgotten, and ignoring it could affect the impact of your action.

What means will you use to influence your audience?

In this stage you should decide on the exact course of action to be taken by the group. The choices will have been narrowed down by moving through the previous steps. The group should now be able to draw up a list of possible actions which could help to bring about the transition identified in the previous box. Encourage them to think creatively, and look back at some of the suggestions in this chapter. Try again to reach consensus over the final choice.

There is one final stage before taking the ideas of the group out onto the public. It is highly recommended that the group draws up an action plan to decide on organisational matters. Although this may not be essential for a simple action, it is a useful habit for any group, and will ensure that tasks are divided out equally, according to skills and preferences. It should also ensure that nothing is forgotten!

They will need to decide:

It is vital to take some time after the action is finished to debrief the group and assess what went well, and what could have gone better. If we are talking about a more complex project, you might want to ensure a monitoring mechanism and regular group meetings to assess how things are going, what could be changed and done better. This can be done at the end of each action in the project.

The following questions may be useful as a framework for conducting an evaluation discussion with your group: 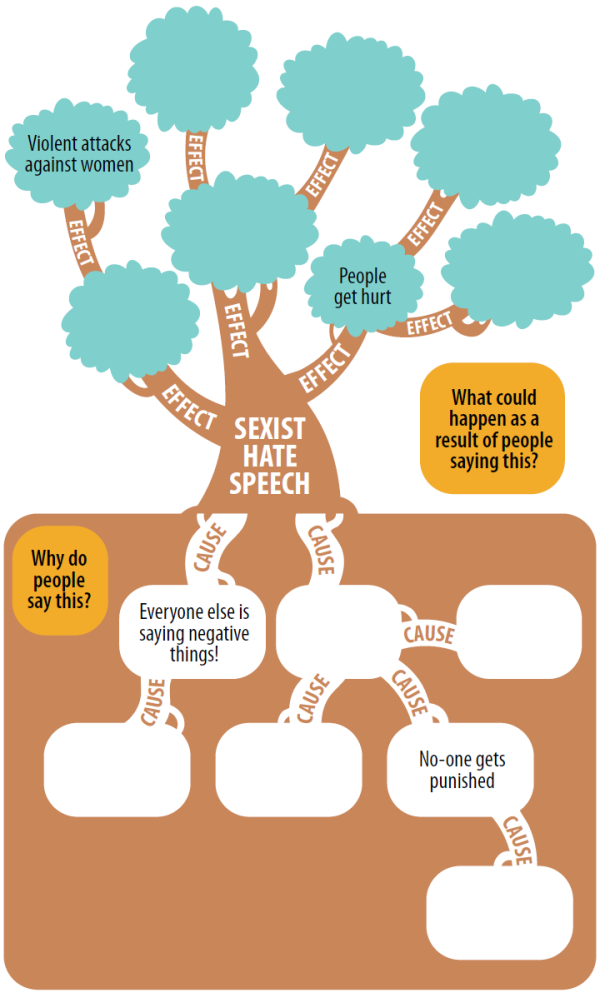 50 This activity is adapted from the activity Roots and branches in Bookmarks, the manual to combat online hate speech through human rights education, Council of Europe, 2016.