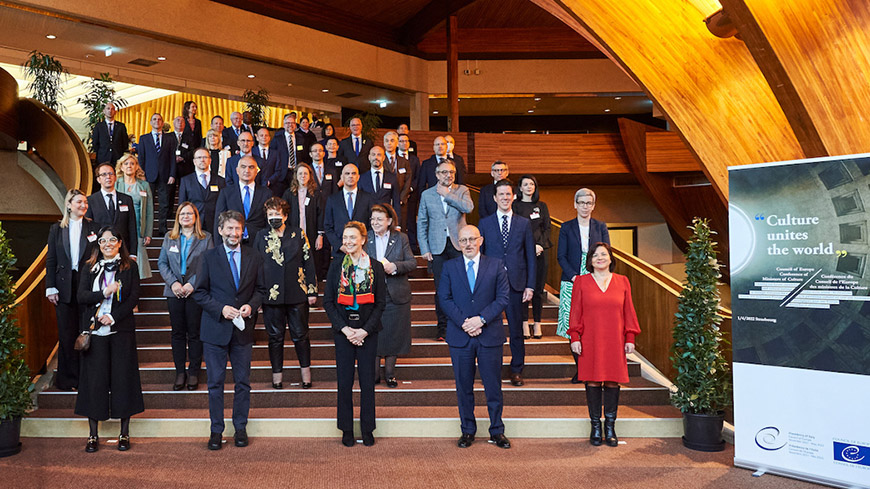 Strasbourg, 01.04.2022 - In the framework of the Italian Presidency of the Committee of Ministers, the Council of Europe welcomed the European Ministers of Culture who discussed (both in person and online) the role played by creativity and cultural heritage in building a diverse and democratic Europe.

The second session of this conference was dedicated to the relevance of drama series co-productions in enabling diversity and pluralism. The session was presented by the President of the Eurimages Fund, Catherine Trautmann, with an intervention by Bero Beyer, CEO of the Netherlands Film Fund. Mr Beyer was also rapporteur at the High Level Conference on Drama Series in Budapest, the starting point of the "Budapest Process on Drama Series".

Ms Trautmann recalled that the creation of the Eurimages Fund took place at a time when culture was a major tool for the building of a common democratic area in Europe. It is this same desire to recognise the specific value of cultural creation and diversity that motivates the Fund’s interest in a different form of audiovisual production, the drama series.

The President of the Fund therefore invited the Council of Europe to show the same determination as in the past to actively promote its values and strengthen cooperation by supporting the development of a new financial tool and legal framework in order to guarantee the independence and freedom of artistic expression of creators.

The session concluded by emphasising the need to continue the Budapest Process on the basis of the exchanges that took place during this Conference, the closing of which was marked by the signing of a Declaration.